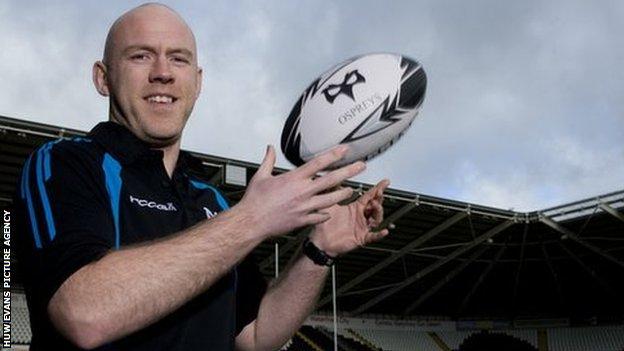 Tandy, 32, leaves his coaching role with Welsh Premiership side Bridgend immediately and will be assisted by forwards coach Jonathan Humphreys.

Holley has left the region by "mutual agreement" after nine years' service, and director of rugby Scott Johnson has brought forward his planned exit.

"This is an excellent opportunity for me and I'm really excited about the challenges ahead," said Tandy.

"Clearly there's an air of expectation on whoever is in charge at the Ospreys, but having been here since the very beginning I know what to expect."

Tandy's appointment came on a day of sudden change at Ospreys, as Holley and Johnson left the region with immediate effect.

Holley had two years left to run on his contract but managing director Mike Cuddy said the time was right to "freshen things up".

Shortly after Holley's exit was announced, the region revealed they had accepted Johnson's offer to resign as director of coaching.

Aussie Johnson had been expected to stay on until the end of the season before joining the Scottish Rugby Union to assist Scotland head coach Andy Robinson.

Tandy was a member of the Ospreys squad when the region was formed in 2003 and went on to make 102 appearances.

A month after playing his final game in March 2010, the back-rower was appointed head coach of Bridgend, having started his coaching career with Ospreys' Under-16 squad.

He secured promotion to the Welsh Premiership in his first season and leaves them in eighth place this season.

"I'm confident in my ability to be able to make a success of this opportunity," said Tandy, who took charge of the Ospreys side in the LV= Cup last season.

"It's a tough job, but I share the Ospreys' ambitions and want to be able to play my part in us achieving those ambitions."

Ospreys moved quickly on Wednesday to name Tandy as the successor to Holley, whose nine-year association with the region came to an end following a "top-to-toe review" of the coaching structure.

Holley took charge with ex-Wales captain Humphreys as his assistant for the 2008-09 season, in the wake of Lyn Jones' exit in May 2008.

Johnson then joined in 2009 to head a three-man coaching team, and they led the side to the Heineken Cup quarter-finals in 2010, where they lost 29-28 to Biarritz.

That disappointment spurred them on to winning the Magners League, taking the title in the competition's inaugural play-off final against Leinster in Dublin.

However, hopes that the Ospreys could move beyond the Heineken Cup quarter-finals were not realised in subsequent seasons.

The Swansea-based region did not reach the 2010-11 knock-out stages and a 36-5 defeat by Biarritz in this season's final Pool Five clash ended their hopes, after they had also twice lost to Saracens and drawn at Treviso.

They currently lie second to Leinster in the RaboDirect Pro12 League (the successor to the Magners League) and maintain hopes of repeating their 2010 success.

Ospreys praised Holley's contribution over recent years, saying he can be "justifiably proud of all he has achieved".

But Cuddy added: "Sean is in agreement with us that in order to move forward professionally, he too is now in a position where he needs a new challenge.

"And by moving on with immediate effect, it allows both him and the Ospreys to draw a clear line under the past and move forward with a fresh impetus."

In a statement, 41-year-old Holley said: "It's going to be a very different way of life and a difficult one at first. I guess I've become part of the furniture.

"However that has also become part of the issue and I've done a lot of on field coaching as well as off-field work during this job. I have a young family to consider so it's time I took a bit of a break from it and recharge myself."

In December 2011, Johnson announced his intention not to look to renew his contract after accepting an offer to join the Scottish Rugby Union.

But his departure has now been brought forward following the announcement of Holley's departure.

"After extensive discussions, Scott has offered to step down from his post now rather than at the end of the season, and we have agreed to release him from the remaining terms of his contract," said Ospreys chief operating officer Andrew Hore.

"It was a gesture that he has made for the good of the Ospreys business and is typical of the way he has continuously put the region first during his three years as director of coaching."

Tandy's first game in charge with be the Pro12 match with Aironi at the Liberty Stadium on Friday.

Flanker and Welsh Rugby Union/Ospreys regional community manager Ben Rose will take at Bridgend until the end of the season.