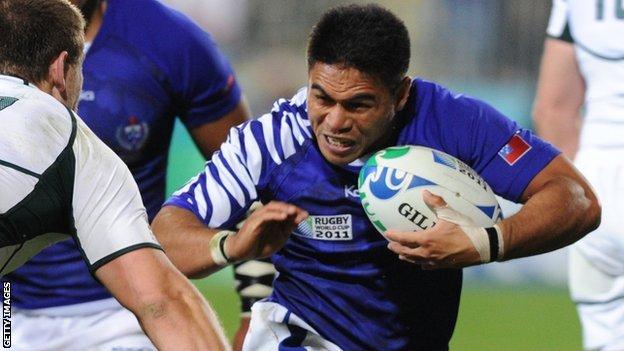 Samoa winger David Lemi will join Worcester next season as a replacement for the outgoing Marcel Garvey.

Lemi, 30, is currently with Pro12 side Glasgow Warriors and has also represented his country in the last two Rugby World Cups.

The move will reunite Lemi with Sixways head coach Richard Hill who signed him for Bristol in 2005.

Garvey, 28, has been at Worcester for six seasons and leaves at the end of this campaign for an undisclosed club.

Lemi, who joined Glasgow on a season-long deal last year and previously played for Wasps, has 36 tries from 95 games in the English top-flight.

Hill said: "David is a try scorer and in today's game, when defences are tight and it can be hard to manufacture tries, many come down to individual brilliance.

"David is the kind of player that makes things happen, a match winner and do things others do not expect."

Lemi added: "I always enjoyed the style of rugby and what I achieved at Bristol under the leadership of Richard Hill, and the chance to work with him again is a huge incentive for me.

"Worcester have some very talented young and up-and-coming players at the club and the challenge for me will be to show that I am worthy of a place in the team and also use my experience to be successful at Sixways."

Garvey added of his departure: "I've had a truly fantastic time at the Warriors and it has been a very difficult decision to decide to move on at the end of this season."