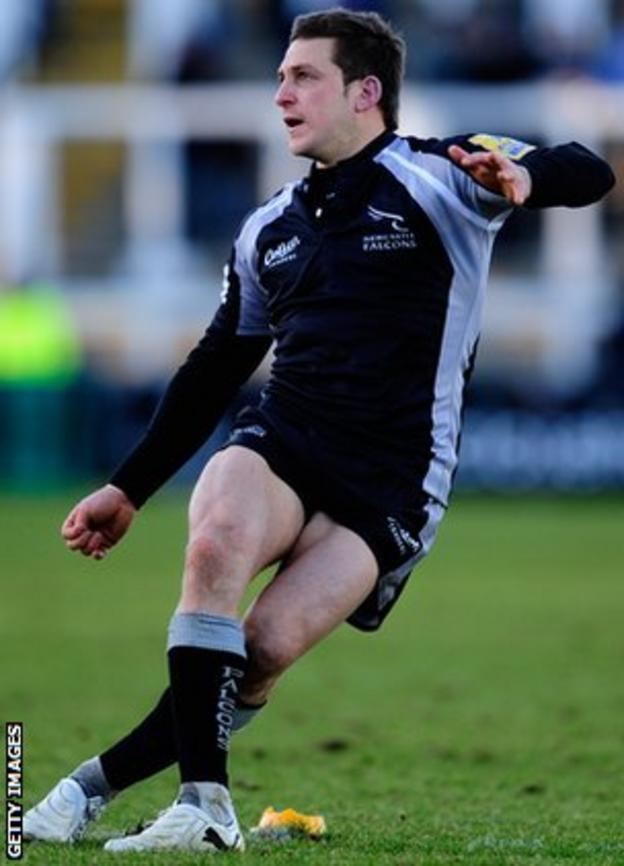 The Exiles had a 10-6 lead at half-time, with Sailosi Tagicakibau's try and Tom Homer's penalty cancelling out Jimmy Gopperth's penalty and drop goal.

But Irish failed to capitalise and Ryan Shortland went over and Gopperth converted before adding a late penalty to give the hosts a much-needed win.

Newcastle's victory helped the Falcons close the gap on second-from-bottom Wasps, who lost at home to Exeter, to six points.

In an uninspiring first half affected by windy conditions, it was the hosts who took an early lead though Gopperth's penalty, after Irish made three unforced errors.

The visitors responded through Homer's kick and went ahead when Newcastle failed to control the loose ball and Tagicakibau ran through to score.

Homer converted before Gopperth's drop goal meant the Exiles went into the break with a four-point lead.

Gopperth's kicking masterclass continued after the break when he landed a 45-metre penalty and when Homer missed his own kick, Newcastle's confidence soared.

The Falcons were reduced to 14 men after Fondse's altercation with Armitage, and the England international was lucky to escape punishment himself for an apparent forearm smash on centre James Fitzpatrick late on.

Irish failed to make the extra man count and Shortland intercepted Armitage's pass and raced over for the try, converted by Gopperth, who then hit the post with a long-range kick.

He made no mistake from the same distance to make it 19-10 and give the Falcons hope in their battle against relegation.

Newcastle director of rugby Gary Gold:"I haven't seen the [sending off] incident, but I'm sure the referee is not going to make a red card decision very easily and I'm very disappointed.

"Our backs are against the wall and that is one of things you can control and I will be very disappointed if we have let ourselves down.

"You just can't afford to do that and we're lucky we didn't pay a higher price for that sending off.

"The way the other 14 guys played for the last 15-20 minutes was a real sign of character, but we really should not be putting ourselves in a position like that.

"It's a happy and relieved changing room we made heavy weather of that. Any win at this stage is an important win and I'm very proud of the character and resilience shown.

"London Irish are one of the best attacking teams in the Premiership and we stuck to our guns and they went through several phases three or four times and we kept them out.

"We were lucky when Ryan scored. I'd just had a call from the medical team that Ryan was really struggling with a bang on the head and he wasn't 100% where he was, so if he wants to play concussed like that all the time I'll be happy to give him a bang on the head before the game."

London Irish head coach Tioby Booth:"I've seen it [the sending off incident] and I don't think the referee had any choice. It was a punch.

"You have to give credit to the guy who made the interception - it was three on one and he's picked it up off his toes. If he hadn't done that, we would have scored.

"It was a messy game and the Kingston Park factor was very much in evidence. Both sides put in a massive amount of effort but you've just seen why six clubs were trying to sign Jimmy Gopperth."

Replacements: Sheriffe for Shortland (73), Chudley for Pilgrim (60), Golding for Shiells (53).