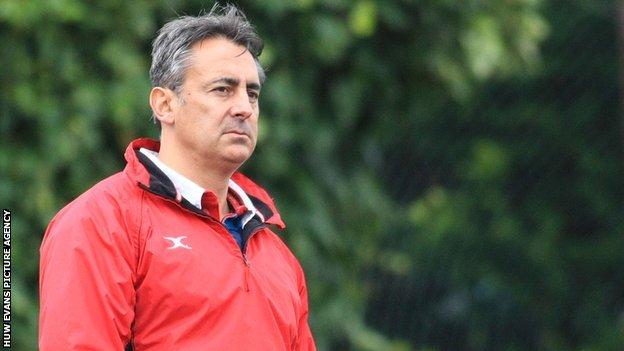 Scarlets coach Nigel Davies admits that with 18 players out of contract at the end of the season he faces a battle to retain a competitive squad.

His comments came in response to reports Gloucester hope to sign England number eight Ben Morgan, although Morgan is contracted for another year.

Wales' four regions have introduced a £3.5m salary cap for next season.

"It's a constant battle with resources to make sure we can put the best possible squad together," said Davies.

"It's part of the job that I have to do.

"It's not always pleasant, but I'm working to a finite number and I have to be able to produce the best squad I can for that."

"I think a lot of the players individually are doing very well and there's an interest out there. But in Ben [Morgan]'s case in particular, we're completely in control of that situation

Morgan, 23, is contracted to the Scarlets until the end of the 2012-13 season but, since making himself available for England and being involved in their Six Nations campaign, he has attracted the attention of Bath and London Irish as well as Gloucester.

Davies said: "Ben is contracted to us for another season. At the moment we're in the middle of renegotiating contracts and putting together a competitive squad for next year within the confines of the resources that we've got.

"So we're looking at all the possibilities and what's available to us and over the course of the next couple of months we'll put that squad together.

"But in Ben's case in particular, we're completely in control of that situation."

Among the Scarlets soon to be out of contract is Wales' record cap-holder Stephen Jones, 34, whose current deal expires at the end of this season, while many of their younger players are attracting attention with eye-catching performances at Test level.

But having a glut of talented players has prompted fears over how the Scarlets can hold on to them with English clubs having a higher salary cap and French clubs enjoying unrestricted spending power.

Aaron Shingler made his Wales debut at openside flanker in the Six Nations leaders' win over Scotland at the weekend while lock Lou Reed took his Test bow as a replacement.

"We've had several approaches for lots of our players at the moment," said Davies.

"I think a lot of the players individually are doing very well and there's an interest out there."

He added: "We don't talk about anybody individually. We have 18 players out of contract, like most regions do, and our first priority is to work with those players.

"In my role as coach probably only about 5% of my time is spent on the rugby field.

"The rest of it is away from that in the management of the players and a big part of that, of course, is putting together competitive squads.

"That's a fact of life and that's what I have to deal with. I enjoy what I do and it's a challenge and we're working through that challenge.

"We've done particularly well at it over the years and I'm sure we'll do well against this season."

The Welsh Rugby Union is due to receive a report into the funding of the four regions, in the face of poor crowds and a difficult economic situation.