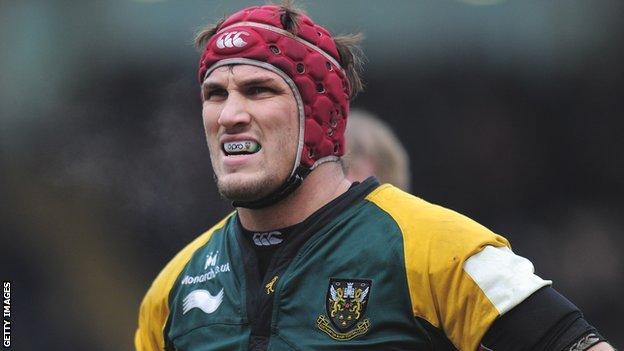 The 28-year-old England Saxons international joined Saints from Stade Francais in 2008 and has gone on to make 75 appearances.

Day said: "It was a fairly easy decision to make. Saints are one of the top clubs in the country and my family are pretty settled here.

"We're in a position where we should be competing for the top honours."

Day added: "The support we get from the fans is massive. Every player wants to be supported and feel like they're part of something when they turn up on a Saturday.

"The whole town's behind us and I'm looking forward to being part of a squad that can hopefully deliver silverware in the future."

Day has won winners medals in both the European Challenge Cup and LV= Cup and played in the 2011 Heineken Cup final.

He represented England Saxons against Italy A and Ireland A in 2011.

Director of rugby Jim Mallinder said: "Christian has been with us for a number of years and knows what makes the club and the team tick.

"He is a quality player in both the set-piece and in the loose and has contributed a lot to our development over the past four seasons.

"He is still in his 20s and has plenty of good years in front of him, and we are delighted that he has chosen to spend them at Franklin's Gardens."