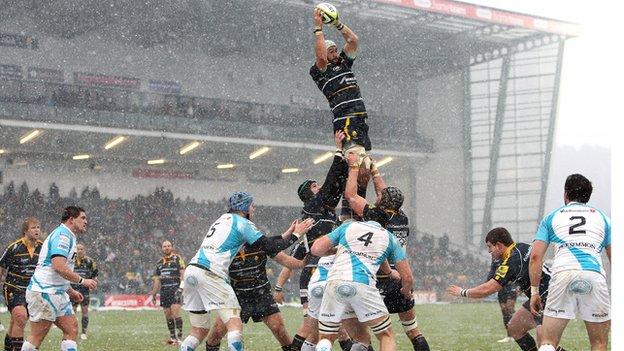 Worcester Warriors back-row forward Blair Cowan says he was pleased by his Premiership debut performance in the 15-12 defeat at Sale Sharks.

The 25-year-old joined Warriors from Cornish Pirates in January.

Cowan told BBC Hereford and Worcester: "The result wasn't what we were looking for but for me personally I was happy to have a full 80 [minutes] on debut.

"I got a good feel for it up there and the defence was a key part of it so I was pretty pleased with my side of it."

Cowan switched to Warriors from Cornish Pirates after impressing during the Championship fixtures between the clubs last season.

The New Zealander was brought in following injuries to Kai Horstmann and Adam Balding among others and he is keen to make his mark at the higher level.

"It's a rare occasion that players come straight into a Premiership club, especially from a lower league and get a starting jersey," he said.

"They also need to have a run of luck with injuries themselves so they get the opportunity.

"It's been immense so far as you can't ask for more from the environment, and the players and coaching staff have really made me feel at home," he added.

Balding continued his comeback from injury by playing just over half of the Warriors A team friendly match at Sale Jets and Cowan knows the competition for places is only likely to become more intense.

Worcester are due to head to Aviva Premiership leaders Harlequins on Saturday, 18 February and Cowan is hoping he will again be involved.

"These are the things you look forward to as a rugby player - these are the teams you put up as targets that you want to play against," he said.

"This is especially the case when you play against the likes of Nick Evans at fly-half.

"You see him back home when he was coming up through my age grades and you think he was one of the best players in the world.

"So to get the chance to play against him, well, I am just really stoked."