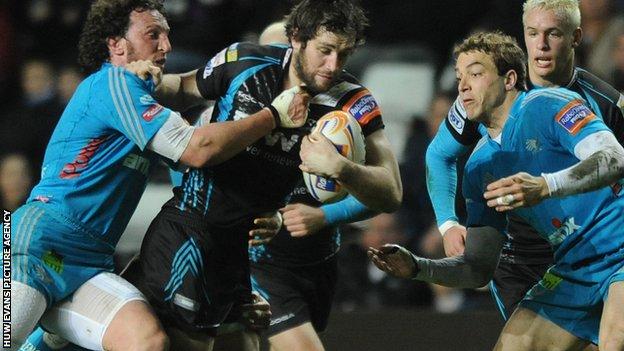 They secured victory with two tries in either half - one a penalty touchdown and the other from centre Andrew Bishop.

Dan Biggar, with three penalties and a conversion, and another two points from Matthew Morgan, gave the Ospreys the win.

Following a turbulent week following the departures of Sean Holley and Scott Johnson, the Ospreys were without 16 players due to injuries and international duties.

The home side produced a workmanlike display during a poor first half and led 10-0 at the interval.

The early penalty try - when Aironi's scrum collapsed as they were being driven over their own line - which Biggar converted, set the Ospreys on their way.

Biggar added a penalty on 25 minutes to extend the lead to 10-0 but Aironi came close to scoring even when down to 14 men.

Italy flanker Mauro Bergamasco was sent to the sin-bin on 33 minutes for an elbow offence on home scrum-half Rhys Webb which forced the half-back to leave the match with a bloodied and cut face.

Biggar increased the advantage with his second penalty after the break, which also brought up his 900th Ospreys point.

Wales lock Alun Wyn Jones, leading from the front with international partner hooker Richard Hibbard, helped his side put real pressure on the Italians, but they were unable to convert that threat into points due to errors.

Aironi made inroads into the home half but the two chances they had in the space of three minutes to get their score ticking came to nothing as outside-half Naas Olivier pushed two 30m penalties wide of the uprights.

Where Olivier missed, Biggar was accurate to extend the Ospreys' lead to 16 points with his third penalty of the night from 38m after Aironi had strayed offside.

The Aironi defence was robust, but again mistakes cost the hosts further tries, with prop Joe Rees losing control of maul possession for the Italians to turn over on their own line.

The Pro12's bottom side scored a try on 76 minutes when Sinoti found space to rush over under the posts before Olivier converted.

Replacement Morgan added the conversion to secure victory for the Ospreys in Tandy's first game in charge.

Not Used: Will Taylor, James Goode.