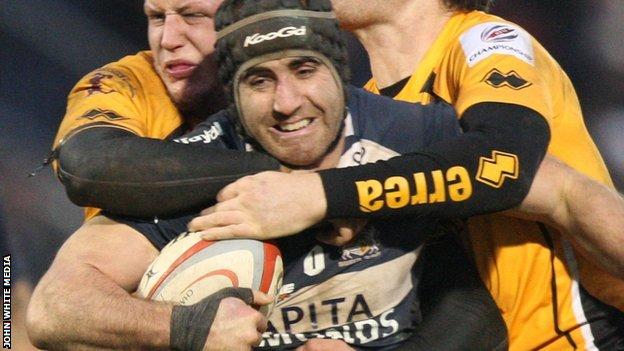 Bristol flanker James Merriman will miss the final two games of the regular Championship season after undergoing surgery on a knee problem.

The 28-year-old went under the knife on Tuesday but is expected to recover in time for the play-offs next month.

"He had the operation to clear out some aspects of his knee," head coach Liam Middleton told BBC Radio Bristol.

"He'll be back for the early play-off games so it won't have a major impact on our selection at the moment."

Bristol have also been boosted by the news captain Iain Grieve is set to return to action in the game at Cornish Pirates, after over a month on the sidelines with a fractured eye socket.

"I want to get him playing as soon as possible," added Middleton. "The more game time he can get before some of the bigger games the better.

"I'll ease him in this week but it's just good to have him back in training and involved in selection."

Bristol's 48-13 win over Moseley last Sunday secured them top spot in the league with two games to spare, but Middleton believes they need to keep up their form going into the play-offs.

"It's a great accomplishment for the club and for the team," he said. "I've said well done to the players but unfortunately that's all we get for it.

"We're a confident side but we're still not the finished article. We're going to stick to the plan we've always had.

"Even if we were sitting third looking to go into second our plans would still be the same, irrespective of our finishing position. It's business as usual."