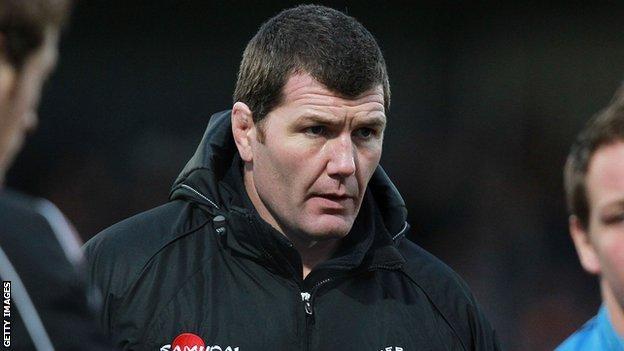 Exeter Chiefs coach Rob Baxter is hoping that his side's lofty position in the Premiership will breed ambition in his players.

The Chiefs sit in fifth place in the table and travel to Adams Park to face a struggling Wasps outfit on Saturday.

"It's not a do-or-die game for us. It's a nice challenge, we have to show that we're ambitious and want to finish as high up as possible," Baxter said.

"Trying to achieve things seems to be bringing the best out of us."

Baxter continued: "We don't have to go to Wasps and win, it's not going to decide success or failure, we're becoming well established, we're fairly comfortable in our league position.

"If we're complacent and we go out there and lose it's a lesson we'll have to learn."

Baxter's side have only lost one game in their last six matches, and the Chiefs coach said he was happy with his side's recent form, adding: "We'll ride that wave as long as we can.

"We're only in our second season in the Premiership and just to be where we are is fantastic."

Despite the positives, Baxter confirmed that the Chiefs will be without Brett Sturgess for the majority of the remainder of the campaign after he broke his arm in the 19-11 win against Leicester Tigers last weekend.

"It's going to be a two-month-plus injury, but there's still a little bit of the season left. If these guys work hard and are ambitious they might create a big game for him to play in down the line."