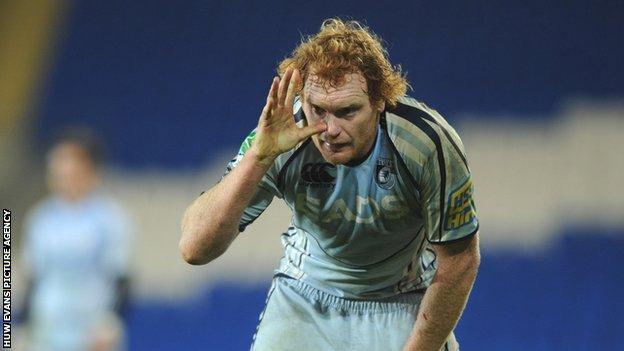 Cardiff Blues captain Paul Tito is predicting a bleak future for the four Welsh regions if they do not get help from the Welsh Rugby Union.

The New Zealander believes that central contracts for the top players could help relieve the financial burden.

"It's a bit of a mess at the moment, isn't it? They're [the regions] having talks with the WRU to pay for the top 22 [Wales players]," Tito said.

"It's got to happen otherwise the regions are going to crash and burn."

The Blues do have internationals Gavin Henson, Lloyd Williams and Scott Andrew available for Friday night's Pro12 game against Ulster at the Arms Park, after they were released from the Wales squad for the weekend.

But the Blues will be without Test stars Jamie Roberts, Leigh Halfpenny, Sam Warburton, Gethin Jenkins and Alex Cuthbert, while Bradley Davies is serving a seven-week ban for his tip tackle on Ireland's Donnacha Ryan.

Tito believes that the absence of so many senior players for large swathes of the domestic season is crippling for the regions.

"They're paying these boys all year round and we don't really see them too much," lock Tito said.

"Something has got to happen otherwise the regions are going to struggle.

"At the moment it's not working because the regions are crying poor and the Welsh Rugby Union have got a fair bit of dough at the moment.

"It's just a balancing act and they haven't got it right at the moment, they need to change it.

"Maybe a little bit like the Irish. I think they contract the top 22 or 25 and they [the Irish Rugby Football Union] pay them."

The financial problems have already started to bite at the Welsh regions, who are unable to match the wage structure on offer in other countries.

The Blues will lose centre Casey Laulala to Pro12 rivals Munster at the end of the season, while the Ospreys, Scarlets and Dragons have all seen important players depart to clubs in France and England recently.

"You don't have too many world-class players in your teams these days and we've got about three, and a couple of them are off contract and one's already gone," Tito added.

"It's pretty sad to lose your playmaker in the backline really, because it makes life fairly difficult."