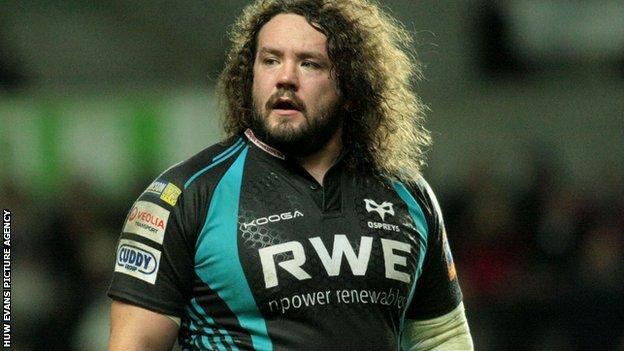 Ospreys and Wales prop Adam Jones has said he decided against a lucrative move to France for the sake of his family.

The 30-year-old recently signed a new two-year contract with the Ospreys, ending speculation about his future.

"It was a tough but you've got to look after your family first," Jones told BBC Sport Wales.

"But I think I made the right choice. Only time will tell."

The Wales prop had been linked with a move to France, where former Ospreys team-mates Lee Byrne, James Hook and Mike Phillips now ply their trade.

But the former Neath player has signed a new deal which will see him stay at the region until 2014.

"There's a host of things," said Jones about his reasons for staying with the Ospreys.

"Obviously you could earn more money elsewhere. You see some of the figures bandied around.

"I've got a little girl and it would be tough on my wife just her and the baby when I'd be out all day training.

"We've got a good support network with both sets of parents close to us. It was a big thing for me. My wife's a teacher in Merthyr so it's not far for her.

"Obviously I enjoy it at the Ospreys. It's my region, it's my club."

I know he's [Steve Tandy] young but he's a good coach. He's also got some good ideas so I think everyone will back him

Wing Shane Williams has confirmed he will retire at the end of the season while Tommy Bowe is set for a return to Ulster.

But despite the changes, Jones believes the Ospreys are set for an exciting future.

"I could have chosen to go to France but I wanted to see it out for a couple of years at the Ospreys and see where we're going," said Jones.

"It's exciting. There are some good kids coming through.

"I guess the public will look at it thinking 'Shane's gone and these different players are going,' which you can understand.

"Maybe we won't come firing this season. I think you could see the way Llanelli [Scarlets] have gone with their backs. A little bit down the line we'll get there."

Wales heach coach Warren Gatland says Tandy "has been thrown in at the deep end."

"I know he's young but he's a good coach," said Jones. "He's straight and he'll call a spade a spade.

"He's also got some good ideas so I think everyone will back him."