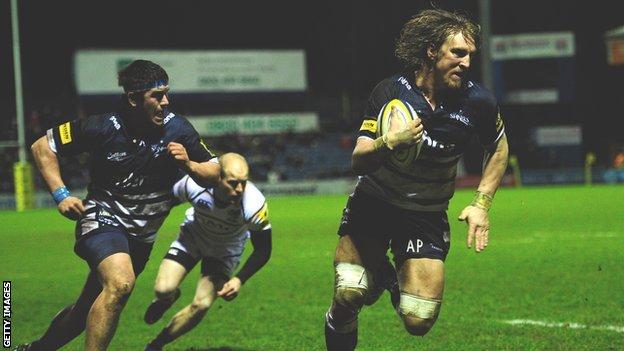 Sale scored six tries for a resounding bonus-point win, condemning Wasps to a ninth Premiership defeat in a row.

Tries by Andy Powell, Johnny Leota and Rob Miller put Sale out of sight and, despite quickfire Joe Simpson tries, Wasps could not secure a bonus point.

Sale skipper Tuitupou rounded off an early move started by Macleod, who then converted, but three infringements by the hosts allowed Daly to kick the visitors in front from the tee.

Peel was first to react to Nick Berry's charged-down clearance kick and the former Wales scrum-half dotted down in the right corner, Macleod slotting the conversion from out wide.

Former Wasps forward Powell was to blame for their opening try after he spilled the ball from a grubber kick and Waldouck collected to go over.

But Macleod ensured the Sharks went to the interval with a nine-point cushion by adding a penalty and drop-goal either side of Tuitupou's second when he chipped ahead and appeared to beat Southwell to the bouncing ball.

Daly pulled three points back but his side lost wing Jack Wallace to the sin bin for repeated infringements and Powell's try came as he attacked the vacant channel from close range.

Daly again added a three pointer but, having secured their bonus point, Sale piled on the agony when Leota crashed over and then sent Miller clear through.

Substitute scrum-half Simpson raced away for two tries in two minutes, both converted by Nick Robinson, but it was not enough for a point, leaving Wasps just six points away from bottom spot.

"It was the most complete attacking performance . There was a little bit of a structure, but I thought our off-loading and collision work allowed us to play.

"We took control of our own game and that's what was pleasing, but again the pace, the support play and the tempo we tried to play with was excellent.

"I thought our half-backs managed the game really well in terms of their decision-making, in terms of when to go wide, when to return and when to go through the middle."

"We struggled with their tempo that they brought to the game, their power runners were just too much for us to handle and they were always on the front-foot.

"Defensively, we really struggled to control their power runners and any team that gets on the front-foot, they're obviously going to cause you problems. The physicality they brought to the game was too much in the first half.

"The appetite was there, I just think they were overpowering us with some of their players they were bringing into the game."