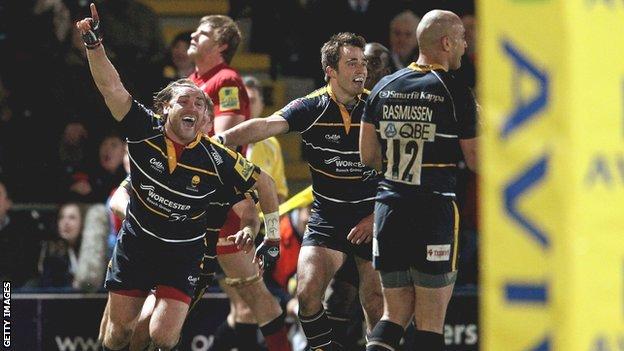 Worcester took a big step to avoiding relegation from the Premiership by beating champions Saracens at Sixways.

Sarries dominated the first half and were ahead after Michael Tagicakibau's try and an Alex Goode penalty.

But Alex Grove's converted try and an Andy Goode penalty gave the hosts the lead at the break.

Goode landed two more shots at goal, to one from Saracens, the Warriors defence holding out to inflict a second successive defeat on the visitors.

The champions started with a pace and intensity that their hosts could not live with as they produced quick ball and fizzed it across the park.

Sarries were ahead on 10 minutes when Tagicakibau rounded Errie Claassens to score and, although Alex Goode missed the extras, the full-back made it an eight-point game from the tee shortly after.

Chris Wyles and Andy Saull were denied tries by slender margins in the left-hand corner in the opening quarter as the visitors totally dominated possession.

Worcester decided to tighten up their play, finally getting a foothold after half an hour when Andy Goode was on target with his first shot at goal.

The Warriors ended the half firmly on top and were unlucky to score out wide twice before magnificent footballing skills from Grove.

The Scotland international celebrated his new deal by hacking on a loose pass on the half volley before regathering to score, Goode's conversion giving Worcester an unlikely two-point lead.

Saracens reverted to type after the break and, after both kickers exchanged early penalties, the home side gained the upper hand.

Saracens were twice turned over in the closing stages as they pushed to breach Worcester's famous defence but the Warriors held on.

"Saracens were scintillating in that first half hour. I was sitting on the bench thinking to myself, this is going to be a long night. We were just hanging on in there and they should have scored a couple of tries.

"Our try was massive as it gave us the impetus we needed just before half-time.

"In the second half they kicked the ball a lot more and played into our hands.

"Earlier in the season we didn't have a tough enough mental attitude as we gave away home games against Wasps and Harlequins but that's not the case now.

"This win was massive as we can now stop looking over our shoulder at what's below us in the table and we can concentrate on moving up."

"We are unbelievably disappointed but we have to be more disciplined and more composed.

"We have six games in the regular season to play. We want to get into the top two so as to ensure that we have a home semi-final."