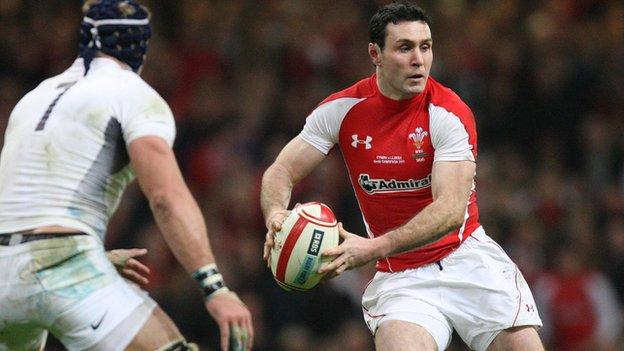 James Hook is out of Wales' match squad for their Triple Crown bid against England on Saturday.

The Perpignan fly-half has not recovered from a bout of chicken pox and his bench place will be taken by Stephen Jones.

Scarlets veteran Jones will extend his Welsh caps record to 105 if he takes to the field.

Lock Alun Wyn Jones and captain Sam Warburton return from injuries for the encounter at Twickenham.

A Wales statement read: "Although Hook is physically well it was felt that, in the best interests of the Welsh team and the opposition, he should be withdrawn from the game.

"Whilst this decision has not been taken lightly, it was concluded that this was the most responsible course of action."

Unbeaten Wales made three changes to the pack that started their 27-13 win over Scotland.

Osprey Alun Wyn Jones will play his first Wales game since the World Cup, ousting team-mate Ryan Jones, who hands back the captaincy to openside Warburton.

Warburton was forced to miss the victory over the Scots because of a dead leg.

Alun Wyn Jones, who win his 60th cap, is back after recovering from a dislocated toe he suffered in training in November.

Owens won the second of his two caps as a replacement in the victory over Scotland after making his debut from the bench against Namibia in the pool stages of the 2011 Rugby World Cup.

The Wales backline remains unchanged from that which started both victories so far in the Championship, against Ireland in Dublin and Scotland in Cardiff.

The only injury concern in the backline had been George North's twisted ankle but the 19-year-old wing has recovered.

"A fit again Alun Wyn Jones is selected based on his Rugby World Cup form and his experience as an international lock," said Wales head coach Warren Gatland.

"He gave us a selection dilemma but it has been a great problem to have and, whilst Ryan Jones is particularly unlucky to miss out on this occasion, this is just that kind of competition for places we have been striving for.

"Ken Owens has been waiting patiently for his chance and injuries elsewhere have meant he gets his opportunity this weekend and we are expecting him to take it."

On the bench Osprey Richard Hibbard provides the hooker cover with Rees and Bennett both injured.

That means there is no place in the 22 for Aaron Shingler, who made an impressive Wales debut against Scotland.

Blues scrum-half Lloyd Williams and Scarlets centre Scott Williams are retained to provide cover for the backs along with recalled 34-year-old Stephen Jones.

Meanwhile, Gatland has said Wales are not intimidated by the task facing them against England.

Wales have won only once at Twickenham in the last 20 years - a 26-19 victory during the Grand Slam season of 2008 and have never completed any of their previous 19 Triple Crowns at the ground.

"If we go there with our heads right and get some quality ball, we have got a good chance. We are not afraid of going to Twickenham now, we are excited about it.

"I expect England might have the attitude that if they can get four penalties, a try and conversion and get 19 points, and they can squeeze us, that might be enough.

"It is a great challenge for us going to Twickenham as favourites. This young team has got to learn to accept that and deal with those expectations, because in Wales there is nothing in between - it is all or nothing.

It will not be as mild as recent days but a pleasant afternoon in store weather-wise at Twickenham. With light winds and some sunshine, a very reasonable 11 or 12 degrees is expected.

"There is only one consequence of being built up and that is you get quickly knocked down. We have got to make sure we keep our feet on the ground.

"A lot of people are talking us up which is going to add to England's motivation, and we have got to handle that.

"I have generally got fond memories of Twickenham [where he began his tenure as Wales coach with victory in 2008], but talking to some Wales players who played over the past 20 years, it was a bit different when they were fully loaded with [Martin] Johnson, [Lawrence] Dallaglio, Back and all the others."