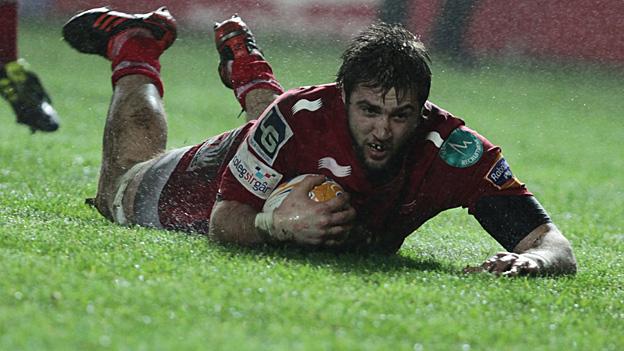 Scarlets came back from 14-0 down to post a bonus-point win against Treviso in the Pro12 League.

But Treviso were only a de Waal penalty ahead at the break after Josh Turnbull and Deacon Manu crossed.

Liam Williams and Liam Davies touched down after the break and Aled Thomas kicked 14 points.

Victory pushed Scarlets to fifth, above Cardiff Blues, in the table but their Welsh rivals have two games in hand on Nigel Davies' side.

The west Wales region also climbed over Ulster in the battle for play-off places.

Wales' squad players Aaron Shingler, Rhodri Jones and Lou Reed started on the replacements bench for hosts while the visitors were without 15 players because of injuries and Six Nations calls.

Flanker Shingler started in Wales' win against Scotland but was been released from Six Nations duty after being left out of Warren Gatland's team to play England.

However, with Stephen Jones needed as bench cover in the wake of James Hook's withdrawal from the Twickenham clash because of illness, Aled Thomas was at 10.

The fly-half sent out some wayward passes, but his goal-kicking was spot on amid difficult conditions.

However, the game was barely underway when Nitoglia made his mark as he went over and Bernabo enjoyed his moment of glory after charging down fly-half Thomas' clearance to gather and score..

Hooker Emyr Phillips timed his pass to perfection for Turnbull to cut through Treviso's defence as Scarlets fought their way back into the game.

Scrum-half Gareth Davies' mazy run established the platform from which prop Manu was able to pick up and dive over, Thomas adding his second successive conversion.

However, de Waal ensured the visitors a slender half-time lead with the last kick of the opening period.

Shingler entered the fray eight minutes after the break as Scarlets continued to struggle to impose themselves on the contest with fellow new Wales cap Reed following him in the 63rd minute.

Reed took over from Dominic Day at lock, a day after the latter's end-of-season move to Bath was announced.

Fly-half Thomas missed a shot at goal, but was on target after another of the Scarlets' Wales squad members, full-back Liam Williams, cut a good angle to power over for their third try.

De Waal and Thomas exchanged penalties before replacement scrum-half Liam Davies dummied his way through to earn the hosts' bonus-point try four minues from the end.

Not Used: A Allori.