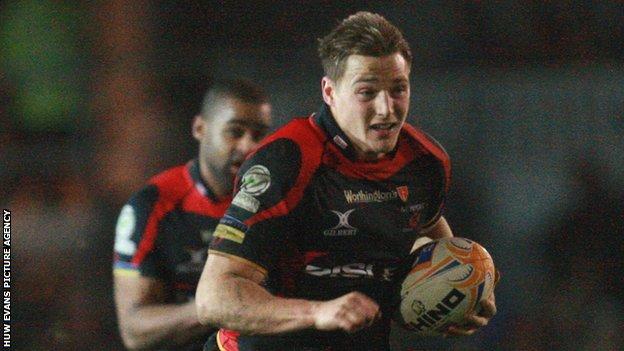 Newport Gwent Dragons edged a tight Pro12 encounter away to bottom side Aironi at the Stadio Zaffanella.

But it took a late penalty try to seal a come-from-behind win, as the Dragons pack forced a series of five-metre scrums on the Italian line.

Lewis Robling stroked over the crucial conversion from in front of the posts.

Fly-half Naas Olivier kicked all of Aironi's points, with opposite number Jason Tovey having kicked a first-half penalty for the Dragons.

The victory saw the Dragons climb to ninth in the Pro12, above Edinburgh and Connacht, and ended the Welsh region's year-long wait for an away win in the league.

A penalty from Tovey had given the Dragons the lead but they could not profit from the 31st minute sin-binning of wing Matteo Pratichetti.

Aironi drew level by the interval with a penalty from Olivier after Dragons centre Andy Tuilagi had been shown a yellow card a minute before the interval.

The Italian side appeared on course for only their fourth win of the Pro12 as Olivier slotted two more penalties to put the Italian side 9-3 ahead after 63 minutes.

But in a dramatic finale, Aironi had veteran Italian hooker Fabio Ongaro dispatched to the sin-bin with just two minutes remaining and the Dragons scrum took full advantage to earn the penalty try.

Robling, who had replaced Tovey at the interval, slotted the simple conversion to clinch a precious win.