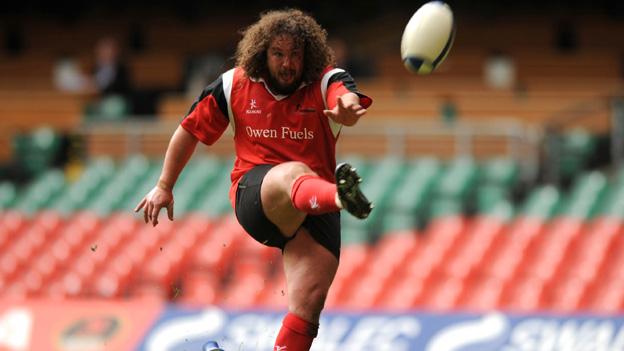 In the the latest of his columns during the Six Nations, Shane Williams discusses Wales' Triple Crown tilt at Twickenham and what Adam Jones means to Wales' feared back division.

Alun Wyn Jones will be determined to have a good game at Twickenham after the sin-binning he suffered there in 2010 when Wales lost on our last visit in the Six Nations.

He's part of a strong match squad, including hooker Ken Owens who is winning his third cap after two games off the bench.

It would be understandable if England were to try to target Ken, but he's the type of player able to cope with it - and England will have their hands full with the other 14 guys as well.

Alun Wyn's lacking a bit of match fitness, but he didn't look too sluggish on Friday, when I watched him against Aironi and he looked as hungry as ever.

But I have to feel for Ryan Jones, who's lost his place in the starting line-up to Alun Wyn, despite playing some of his best rugby at the moment.

The problem for Ryan is that Sam Warburton is back as well and the back-row is looking really strong.

I'm also happy to see that the backline is unchanged and the great news is that George North is fit.

We all know it's a big backline, but when you look at the likes of George, Jonathan Davies and Alex Cuthbert, they're big, heavy, strong guys, but they're also the fastest guys in the squad.

I know it's not only about pace sometimes, but these guys have all the skills for Test rugby.

Jamie Roberts is also a big, physical guy who goes forward, and he's got some great handling skills too.

You do need your strength and your powerhouses, but when you have players like that who have the passing skills and the vision to play in a backline as well, it's great and they're worth their weight in gold and it hasn't been the case for Wales in the past, has it?

We haven't always had the biggest backline - now that we have, it's encouraging to see that they've got all the skills as well and I think they've proven that in the two opening tournament wins.

The good thing about the fact that they're young and there's a lot riding on them at the moment is that they haven't had this pressure before.

They'll just want to play on Saturday and that's great that they don't put the extra burden on themselves, the added pressure - that they can just go out and play rugby and give it their all.

I've certainly seen and benefitted from the difference in the scrum area when Adam's playing. I've also noticed his absence when he's not been on the field

If they win, they win. If they don't win, then so be it and I think that's the way you've got to approach these games, not worry about the fact it's a Triple Crown game.

What we haven't seen from England is the direct, target play in centre-midfield with the likes of Owen Farrell playing there.

England haven't had the biggest of centres so they haven't been that direct, really.

But if Manu Tuilagi starts or comes off the bench, they'll have go-forward and someone who will take players on who won't be afraid to attack Jonathan Davies and Jamie Roberts.

Up front, Wales are blessed by the presence of Adam Jones at tight-head prop.

I've certainly seen and benefitted from the difference in the scrum area when Adam's playing. I've also noticed his absence when he's not been on the field.

Adam has worked hard to get where he is and it hasn't always been easy for him. But when he gets you on the front foot in the scrum, it's a huge boost to the rest of the team.

He also makes his mark around the field. People seem to give Adam his dues for scrummaging, but he does work extremely hard to get around that park and get in good positions.

Adam is a really good footballer, even if you wouldn't think it to look at him, and he probably doesn't get the credit he deserves.

He doesn't score many tries or beat many players, but he grafts and I'm sure if you speak to any back in the Ospreys or Wales teams, when he plays and you've got the go forward it makes the world of difference.

Sadly the team is playing amid worries over a lot of players' futures because of the financial issues involving the Welsh regions.

I think it can affect things because it's your livelihood and there's nothing worse than uncertainty.

You want things like this sorted, especially before the big games because the only thing you want to concentrate on is playing rugby.

The fact that you don't know what's happening next season, whether you're going to play away from home, in France or wherever it is - it is going to affect you.

But it's just a shame really that some of the players have this looming over them at the moment.

If I was Warren Gatland I certainly wouldn't want my big players worrying about what's going to happen next season.

However, the guys have been under this sort of pressure before, whether playing or other circumstances.

So, I'm sure they'll be able to cope with it, but it would be nice to be playing an important game like this with no concerns at all and no worries about your future.