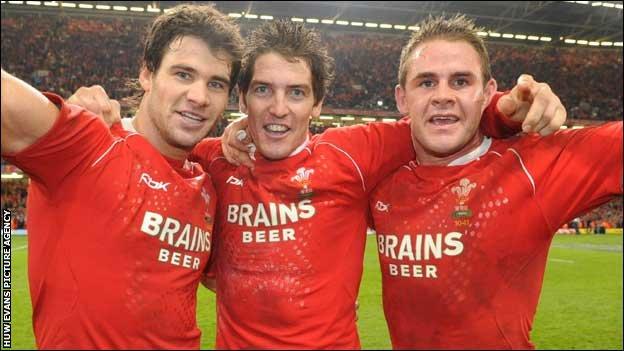 Warren Gatland has admitted he does not know how to stop the exodus of Welsh internationals heading to France.

in the summer as the British and Irish Lions prop is to join Top 14 side Toulon.

Mike Phillips, James Hook, Lee Byrne are already in France while Huw Bennett, Luke Charteris and Aled Brew are set for French moves in the summer.

GOING IN THE SUMMER

"I don't know what the answer is," said Wales coach Gatland.

"It is difficult to compete with the money the players are being offered overseas, given the financial pressures our regions are under at the moment.

"My stance has always been ideally we would love them to stay here, and we will do everything we can to try to keep them here, but players have a very short career in terms of playing at this level."

The four Welsh regions have agreed a £3.5m-a-squad salary cap from next season and Welsh rugby's star players are being offered tempting big-money deals in the lucrative French league.

Jenkins has won 84 Wales caps and played in five Tests for the British and Irish Lions and the 31-year-old revealed the financial rewards on offer in France.

His Blues deal expires in the summer and Jenkins admitted: "I was only being offered say 60% of the money I was already on so and that had a big impact on me leaving."

Wales scrum-half Phillips, meanwhile, believes his move to French side Bayonne has had a positive impact on his career.

"It has been good for me," said the Lions number nine.

"We've had a lot of changes in coaches at Bayonne since I have been there, but it has been exciting.

"It is what I wanted and what I needed and I have loved every minute of it. It has freshened me up.

"It was a chance to experience new things, try new things and experience France, which I have always wanted to do.

"It is a beautiful part of the world. I live in Biarritz, which is stunning, and the people have welcomed me really well."

But speaking before Jenkins' announcement to leave the Blues, former Wales captain Matthew Rees admitted the number of players heading abroad is a concern.

"We are working well at international level, but the regions are an issue at the moment," said the Scarlets hooker, who is unavailable for the England clash due to injury.

"Especially when you start seeing your best players in Wales leaving.

"I think something needs to be done sooner rather than later to stop this from happening.

"We've put the building blocks in place in terms of the international scene and Wales as a team.

"But that is only as strong as your regions are, and we've got to make sure that is sorted sooner rather than later."