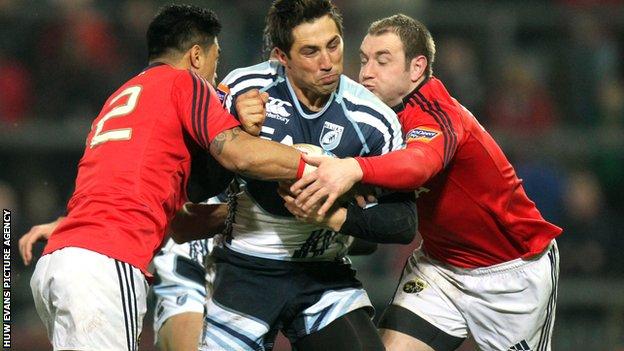 A second-half fight-back was not enough for Cardiff Blues as Munster held on to secure victory at Thomond Park.

A Dan Parks penalty had given the visitors an early lead before Felix Jones crossed for the game's opening try.

Munster led 16-3 at the interval but the visitors hit back with a Richard Mustoe try, converted by Dan Parks.

Replacement Ben Blair reduced the gap to three points but the Blues could not overturn the deficit.

It was a welcome result for Munster in a week in which their head coach Tony McGahan's departure for the Wallaby defensive post was all but confirmed.

The Blues nosed ahead thanks to Parks's fifth-minute opener, but Ian Keatley punished Gavin Henson for going offside to kick the hosts level.

A BJ Botha-inspired scrum won Munster a pressure-lifting penalty, and they struck for their first try in the very next phase.

Simon Zebo provided the injection of pace, bursting on to Mick O'Driscoll's inviting inside pass to carve open the Cardiff defence and the winger then sent Jones in by the posts.

The try marked Jones' first home appearance of the season after his recovery from a foot injury that had ruled him out of last year's World Cup.

Keatley converted and tagged on two more successful penalties, the second from just a few metres inside the Blues' half.

Munster's forwards had a stranglehold on proceedings, gobbling up the restarts and carrying strongly into contact.

Michael Paterson led the Blues' response, breaking over halfway and linking with the busy Richie Rees only for a crucial turnover from Zebo to keep the Blues at bay.

The Cardiff scrum crumpled again late on, but Keatley slid the resulting penalty wide in the final minute of the half.

But the Blues were to hit back in spectacular style early in the second half when Henson darted through a midfield gap to set up a good position.

They duly took advantage, a timely string of passes putting winger Mustoe over in the right corner with Parks's conversion closing the gap to 16-10.

Although Parks missed a kickable penalty, the Blues continued to force the issue and with Keatley failing to convert a penalty at the other end, the game was there for the taking.

Replacements Rhys Thomas, Ceri Sweeney and Ben Blair all had an impact for the Blues, the latter landing a central penalty to make it a three-point game.

Paul Tito then earned a yellow card for killing Munster ball as the home pack laid siege to the visitors' try-line.

Munster were left sweating by the finish but the Blues could only secure a losing bonus point to keep alive their play-off hopes.