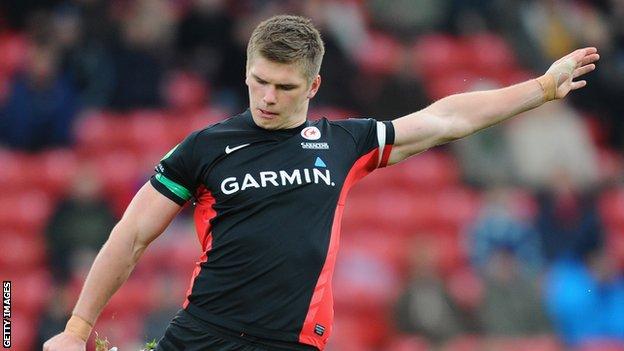 Sarries plan to announce 12 other deal extensions across Thursday and Friday.

Farrell landed a conversion and a penalty in a 13-6 victory over Scotland and kicked 14 points in last weekend's 19-15 win over Italy in Rome.

The son of Saracens coach Andy Farrell, he made his first-team debut in October 2008 and has gone on to play 46 times for the reigning Premiership champions, amassing 603 points, 213 of which have come this season.

Saracens director of rugby Mark McCall said: "Owen obviously has a wonderfully exciting future in the game, at club and international level, and we are delighted he has pledged his future to Saracens."

The former Cambridge man has featured in 20 games this term and made a try-scoring debut for England Saxons in a 23-17 win over Irish Wolfhounds in January.

Botha, who has three England caps to his name, is in his third season with Saracens, where he has made 77 appearances.

Centre Taylor, 22, a summer signing from Bedford Blues, has featured eight times this season, while 20-year-old fly-half Stanley has been limited to four senior appearances.