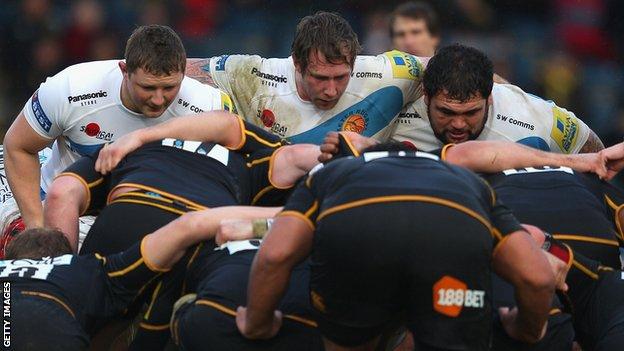 Exeter Chiefs boss Rob Baxter does not expect a large influx of new players into his squad in the summer.

The Chiefs have already re-signed centre Jason Shoemark and prop Hoani Tui and expect more players to extend their deals in the coming weeks.

"The most important thing for me is I want my good players to stay," Baxter told BBC South West.

"We're not going to make massive changes to the squad, we might bring a handful of players in," he added.

With Exeter fifth in the Premiership and in the quarter-finals of the Amlin Cup, the club could qualify for the Heineken Cup for the first time.

Retaining your players is the key to having successive good seasons

But Baxter says even if they do make it into European rugby's premier tournament, it will not mean he rushes out to bring in new faces.

"First and foremost having the Heineken Cup here makes it attractive for some of the very good players I have here to stay.

"Retaining your players is the key to having successive good seasons.

"There's not going to be a sudden thing where Exeter get into the Heineken Cup and all of a sudden I'm expecting us to go onto the pitch with a different team.

"It's not viable, I don't want us to do that and it wouldn't work for us anyhow."

But he says there is no doubt he will bring in a handful of new faces in the summer.

"People can get carried away with what they think about recruitment. First and foremost you have your solid foundation, which is the squad of players you have, then you work very hard with your academy to develop your own good players.

"Then we've got to work hard to bring in three or four players who will buy into everything we want to do and add to the top end of the club and that's all you need to do."

One of the players Baxter wants to keep is fly-half Ignacio Mieres.

The Argentinian's contract is up in the summer but Baxter says no deal has yet been done.

"We'd like Ignacio to stay, Ignacio wants to stay and that's where we are - until things are finalised that's all I can say," he added.