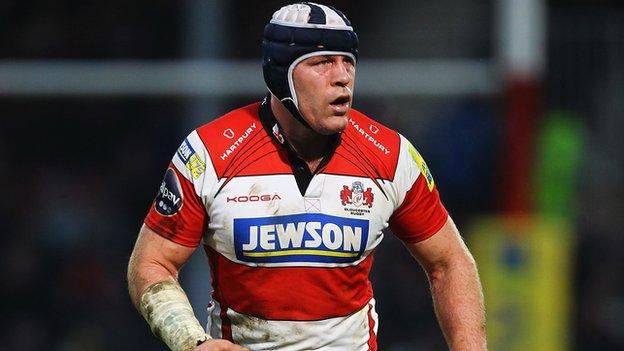 Gloucester Rugby back row forward and former captain Peter Buxton has signed a new one-year contract with the club.

Buxton's contract was due to expire at the end of the current campaign but the 33-year-old will now stay on for his 11th season at Kingsholm.

"To get another season is fantastic, I've had a great time since I joined," Buxton told BBC Radio Gloucestershire.

"To have the opportunity to do another 12 months and play here for another year is really good for me."

Buxton joined the Cherry and Whites from Newport in 2002, as one of former director of rugby Nigel Melville's first signings and has played 253 games for the club in all competitions.

He gives us an option there that we can always go to. He's very durable and he knows the Premiership

That total makes him the player who has played the most matches for the club of the current squad, just ahead of team-mates Andy Hazell and James Simpson-Daniel, both who have been at Kingsholm longer.

Buxton's new deal will give Gloucester continuity in an area of the team where they have lost Alasdair Strokosch, who is joining French side Perpignan next season.

"He is someone who offers a huge amount both on and off the pitch," said Gloucester head coach Bryan Redpath.

"With Alasdair [Strokosch] going, Matt Cox has come through and Peter is always at the club. He's been a great stalwart to the place and he always pushed Alasdair for a starting spot.

"He gives us an option there that we can always go to. He's very durable and he knows the Premiership, so for us to get him tied up with Strokes [Strokosch] moving on, it gives you that security blanket of someone there that you can trust."

Buxton made the announcement at a question and answer session at Kingsholm as part of his celebration year to mark his time at the club.