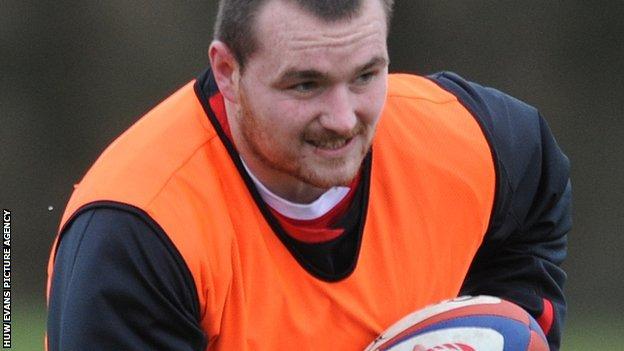 Hooker Ken Owens believes he can help Wales iron out any line-out problems before Saturday's Six Nations visit to Twickenham to face England.

The Wales line-out has faltered in their opening two wins, losing the ball six times on their own throw.

"We've been working on it this week. The frustrating thing is that it's been our mistakes rather than the opposition reading us that have caused problems."

Wales have added height and expertise to their line-out options by selecting British and Irish Lion Alun Wyn Jones in place of Ryan Jones, who usually operates in the back row.

Ireland's jumpers found particular success in disrupting Wales' ball in the opening game in Dublin, and a degree of confusion crept into the line-out in the second half against Scotland when Owens replaced the injured Huw Bennett.

Coach Warren Gatland conceded the set-piece has been far from perfect so far but stressed he had every faith in Owens' ability to find his target at Twickenham.

"A little bit has been made of the line-out," said Gatland. "It probably hasn't functioned in the first couple of games as well as we would have liked and people have tried to make an issue of it.

"I think we were better against Scotland and as we work on the combinations I think our line-out will continue to improve in this tournament."

Gatland has turned to Owens after injuries deprived him of frontline pair Bennett and Matthew Rees.

In Rees's absence, Bennett started the opening two wins over Ireland and Scotland, taking his cap tally to 51.

But a calf injury forced him off during the first half of the win over the Scots, giving Owens a chance to win only his second cap in his first appearance at the Millennium Stadium.

The 25-year-old Scarlets hooker now finds himself thrust into Wales' quest for a Triple Crown on a ground that has yielded just one victory in the past 25 years.

"This is the next step for Ken," said Wales forwards coach Robin McBryde. "He's done all but start. He's come on and played his role off the bench.

"He's showed on more than one occasion what he can do with ball in hand - he's a very strong carrier of the ball. Just a little bit more concentration is needed now on the set-piece stuff."

A year ago, Owens was watching the corresponding fixture "at home or in a local pub" as he recovered from surgery on a neck injury.

A few months later, he made his long-awaited debut at the World Cup against Namibia after injuries to Rees and Richard Hibbard had opened the door for an unexpected call into the squad.

"It's certainly been a turnaround," he said. "And now I'm starting in the Six Nations, which is huge."

Owens' expected opposite number at Twickenham will be Dylan Hartley, who has earned a reputation as one of the more fiery characters in international rugby.

And while Owens will have two of the game's leading props either side of him in Gethin Jenkins and Adam Jones, England's Hartley is set to be joined once more by Dan Cole and Alex Corbisiero - two players who have struggled to start regularly for their club sides this season.

But Owens said: "Dan Cole especially has been unlucky not to start a little bit more for Leicester. They've gone well in their first two games but having Gethin and Adam's experience next to me will be vital.

"Dylan Hartley is a very good player. He's relatively young but he's been captain of Northampton for the past two seasons.

"They've got a very dominant pack and that's what England pride themselves on as well. But as a unit we can work together and nullify his threat.

"That's the most important thing - especially at Twickenham - to work together, stick as one unit and we'll be fine."