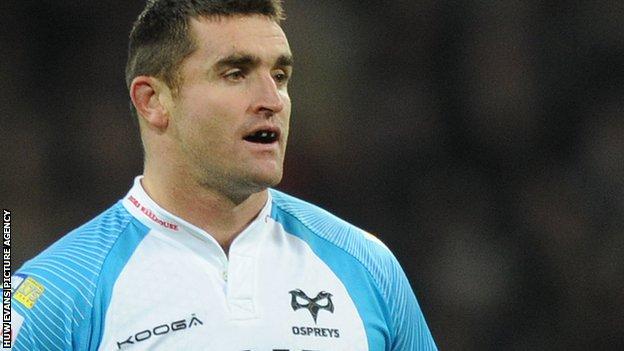 Ospreys hooker Huw Bennett has said on Twitter he is joining French club Lyon at the end of the season.

"Looking forward to my new challenge of playing in France with Lyon. Until then I am fully [committed] to ending the season on a high," he tweeted.

"I want to thank [the Ospreys] and our awesome supporters for a fantastic nine years."

The Ospreys had conceded that there was a "strong possibility" Bennett would leave the Welsh region at the end of the season.

The 28-year-old's Liberty Stadium deal expires in the summer and Bennett had been linked with a move to the lucrative French Top 14 league.

"There's a strong possibility that he [Bennett] will go," Ospreys forwards coach Jonathan Humphreys had said.

"And if he does, he'll be going with our very, very best wishes."

The Swansea-based region have lost a host of big-name players in the last 18 months.

Scrum-half Phillips joined Bayonne, fly-half Hook signed for Perpignan and full-back Byrne moved to Clermont Auvergne - and Bennett is expected to join his fellow Wales team-mates in France in the summer.

The Ospreys squad is set to be depleted further in the summer as Ireland wing Tommy Bowe is expected to join Ulster, record try-scorer Shane Williams is to retire and back-rower Tom Smith is to join London Irish.

Now Bennett is set to continue the Liberty Stadium exodus as the Ospreys, like Wales' other three regions, have to adjust to operating with a £3.5m salary cap from next season.

Bennett, who has won 51 Wales caps since his 2003 debut against Ireland, has been at the Ospreys since the region's formation in 2003 and the Ebbw Vale-born forward has won three league titles.

"If Huw leaves this region, it will be sad for us as he has been here for nine years," said Humphreys.

"He hasn't acted anything other than impeccably in his manner in his negotiations. He has given everything to this region.

"It is just a unfortunate with the salary cap coming into place when a player is out of contract.

"It is a very unfortunate situation for Huw to be in - but the quality player that he is, he will pick up a club and he'll be great.

"And if that's outside of Wales, as I imagine it will have to be, then so be it. That is the financial restrictions on us."

Bennett is the latest in a series of departures from the Ospreys, following the announcement earlier this week that director of coaching Scott Johnson and head coach Sean Holley have left with immediate effect.