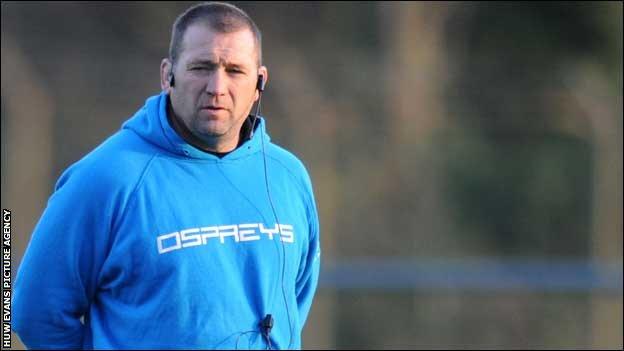 Jonathan Humphreys insists he will stay at the Ospreys despite the departures of director of coaching Scott Johnson and head coach Sean Holley.

The Ospreys forwards coach's Liberty Stadium deal is until the summer of 2014 and he has vowed to assist new head coach Steve Tandy.

"I'm contracted for another couple of years," said the former Wales captain. "I will be here next year.

"I'm here to support Steve and my main role is the forwards coach."

Humphreys is an Ospreys stalwart and the former Cardiff and Bath hooker has pledged to continue at the Welsh region during a difficult time.

The Ospreys region have lost a host of big-name players in the last 18 months and the squad is set to be depleted further in the summer as Ireland wing Tommy Bowe is expected to join Ulster, record try-scorer Shane Williams is to retire, back-rower Tom Smith is to join London Irish and Wales hooker Huw Bennett is set to leave.

And Humphreys will hope to ensure the Ospreys remain a RaboDirect Pro12 League force next season as the Ospreys, like Wales' other three regions, have to adjust to operating with a £3.5m salary cap without experienced coaches Holley and Johnson.

"I want to develop and become a respected forwards coach," said the the 42-year-old, who starred for Wales at two World Cups.