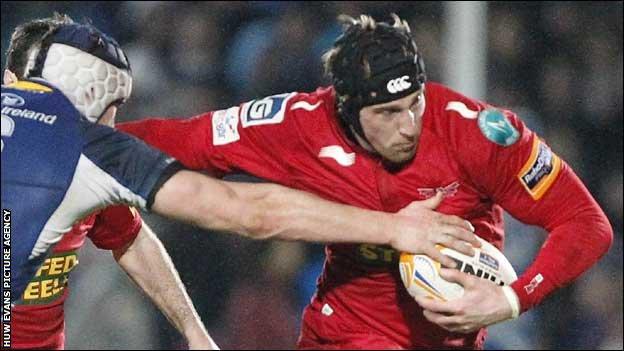 Giant lock Dominic Day is to leave the Scarlets and join Bath on a three-year deal at the end of the season in a bid to earn England international honours.

The former Wales under-20 international has made 97 appearances since graduating from the Llanelli academy and is a key member of their pack.

The 26-year-old, who has grandparents from Hereford, is "excited" about joining the English Premiership side.

"Bath are a hugely ambitious club and I'm very excited to be joining them.

"The Aviva Premiership is a hugely competitive league and playing in it is a challenge I've always wanted, so I'm really looking forward to getting involved and pushing myself in a new league."

Welsh club rugby is suffering an exodus of players joining rival leagues as the Scarlets, like Wales' other three regions, have to adjust to operating with a £3.5m salary cap from next season.

Scarlets coach Nigel Davies has already admitted that with 18 players out of contract at the end of the season, the club faces a "battle" to retain a competitive squad.

Scottish wing has already confirmed he is leaving the Parc y Scarlets club in the summer and now 6ft 6in and 18st powerhouse Day has announced he will leave after five seasons in Llanelli.

Scarlets head coach Nigel Davies said: "Dom has been a good servant to the Scarlets for a number of seasons and now at 26 and at a key time in his playing career feels it's time to gain some different playing experience in the English league.

"As an English qualified player as well as Welsh, a move to Bath also puts Dom in a place where he believes he can in the future push for potential international aspirations beyond club rugby."

Pembroke-born Day hopes to follow Scarlets colleague Ben Morgan into the England squad while Morgan, whose Scarlets contract is until 2013, has also been linked to a move to the English Premiership with Gloucester.

"Dominic is already an experienced player, having played in both the RaboDirect Pro12 and the Heineken Cup," Bath's director of rugby Sir Ian McGeechan said.

"He has a good range of skills necessary in a lock and at 26 has the potential to develop further.

"He has a great attitude and we have no doubt that he'll fit in very well with the Bath culture and be a great addition to the squad."