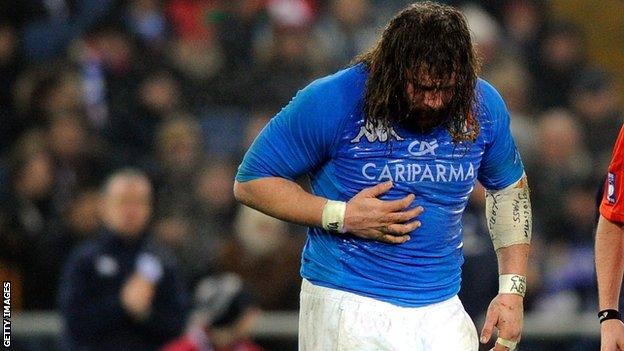 The 30-year-old returns after suffering from a cracked rib in their defeat by England, though may not recover in time to face Wales.

Flanker Mauro Bergamasco is suspended so Manoa Vosawai is called up, while Mirco Bergamasco also returns.

Racing Metro centre Bergamasco, the younger brother of Mauro, comes back for the first time since his shoulder injury at the 2011 World Cup.

Mauro Bergamasco misses the rest of the Six Nations after he was banned for four weeks for punching Ospreys scrum-half Rhys Webb.

The 32-year-old open-side received a yellow card for the off-the-ball incident in Aironi's 23-7 Pro 12 defeat at Ospreys but was cited for foul play.

He admitted the charge and was banned until 21 March at a disciplinary hearing he attended by video-link.

Webb was taken to hospital after the incident, suffering a broken nose.

Bergamasco will miss Italy's trip to Wales in Cardiff on 10 March, with Azzurri coach Jacques Brunel due to announce his team on 7 March. The Italians complete their campaign against Scotland in Rome on 17 March.