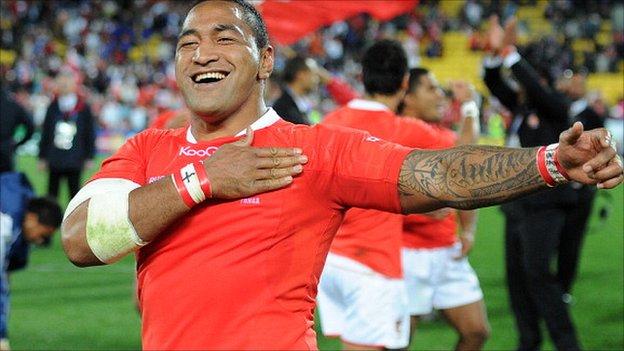 London Irish have signed 28-year-old Tonga prop Halani Aulika and Scotland hooker Scott Lawson on two-year contracts for the start of next season.

Aulika, has been capped five times for Tonga, and can play at both tight-head and loose-head in the front row.

He played for the Highlanders in the 2011 Super Rugby campaign and for Otago in New Zealand's domestic competition.

Lawson, 30, arrives from Gloucester, has 29 caps for Scotland and faces France in the Six Nations on Sunday.

"His New Zealand upbringing means he displays good set-piece attributes which is what we need in the Northern Hemisphere."

Aulika said the club's style of rugby was a big draw in his decision to sign.

"London Irish play a very expansive style of rugby that I am familiar with having played a similar style in New Zealand," he said.

"I'm looking forward to the challenge of playing in the Premiership and testing myself against some of the best players in Europe."

Lawson joined Gloucester from Sale Sharks in 2008 and started his professional career with Glasgow Warriors.

"Scott is an excellent signing for London Irish and will bring with him a wealth of both Premiership and international experience," added Booth.

"He is a reliable set piece operator and lively in the loose. He is a fantastic addition to our squad."

Lawson said his decision to leave Gloucester was a tough one but was looking forward to the new challenge awaiting him at London Irish.

"I have thoroughly enjoyed my time at Gloucester and am sad to leave," he said.

"However, I am delighted to be moving to London Irish and it's a great opportunity for me to progress my game further.

"Like Gloucester, their supporters are very passionate about their club and I am looking forward to be playing in front of them at Madejski Stadium next season."