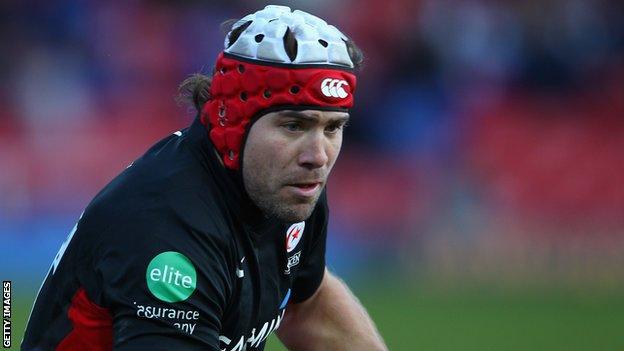 Three-times capped South Africa hooker Brits, 30, has featured 78 times for Sarries since arriving from Super 14 side Stormers in 2009.

Prop Stevens, 29, was a replacement in England's opening Six Nations victories against Scotland and Italy.

He returned to the international fold in 2011 after a two-year drugs ban.

"Matt is widely recognised as a world-class player, performing week in week out at the very highest level," said director of rugby Mark McCall.

"We are fortunate to have a player of such quality within our squad, and we are very pleased he has agreed to extend his contract."

Of Brits, McCall added: "I don't believe there is a club in Europe that would not like to have such a gifted and committed player."

Italy's Nieto, a 35-year-old prop who has won 31 international caps, has been a persistent member of the Saracens front row since arriving from Gloucester in 2009, playing 73 times.

Hooker George, 21, made his first-team debut last season and has gone on to feature in 39 games for the north London club.

The Premiership champions announced new deals for six players - including Owen Farrell, Mouritz Botha and Ernst Joubert - on Wednesday, and are set to confirm six further contracts on Friday.