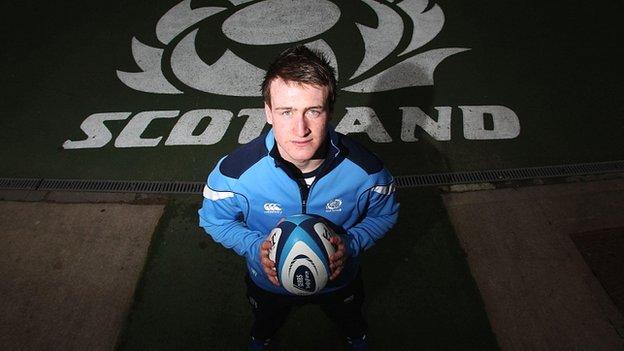 Former Scotland scrum-half Andy Nicol says he is "hugely excited" by the potential of full-back Stuart Hogg, set for his first start against France at Murrayfield in the Six Nations.

The 19-year-old will be the first teenager to start an international for Scotland since Jim Renwick in 1972.

Hogg made his debut as a replacement in the defeat by Wales a fortnight ago.

"I am hugely excited about what this kid can do for Scotland over many years to come," said BBC pundit Nicol.

"He's got flair, he has a crack, he's got that side-step ability, he stood Jamie Roberts up [against Wales], which is no mean feat, and he should have had a try.

"The Millennium Stadium is a fairly intimidating place to go, especially with that Welsh back-line and the form it's in, but he looked to the manner born, so at ease in international rugby."

The Glasgow player was denied a try on his international debut when he was incorrectly deemed to have knocked on with the line at his mercy.

But his speed of thought, quick feet and angles of running impressed many, with some observers suggesting he was the most promising back to emerge from Scotland since Gregor Townsend.

"He's from good rugby stock - his dad used to play and he's had a good solid grounding in the game," said Nicol, who won 23 caps for Scotland.

Even though he's got number 15 on his shirt, you'll see him in a creative role, which I would certainly encourage

"He's lived and breathed rugby since he was born, as most young kids do in Hawick. He seems really calm, really level-headed but really excited about the prospect of playing for Scotland."

However, Nicol says head coach Andy Robinson should resist the temptation to switch Hogg to Scotland's midfield until he has bedded into the side.

"It's too early for that," he said. "I don't think he's currently big enough to play in the midfield. There's a lot of big boys about at the moment.

"I know [Glasgow head coach] Sean Lineen has earmarked him possibly as a centre and he's played at stand-off as well, but at the moment it's right that he's at full-back.

"Let's let him get a number of games under his belt in international rugby and if he evolves as we expect him to, that might mean he moves into a more creative role as a playmaker.

"But from a full-back position, I think you'll see him coming in as first receiver quite a lot in broken-feld and phase play, similar to what Chris Paterson did for Scotland.

"He's not just going to be hiding at full-back, they'll try and get him on the ball as much as possible.

"So even though he's got number 15 on his shirt, you'll see him in this creative role, which I would certainly encourage."