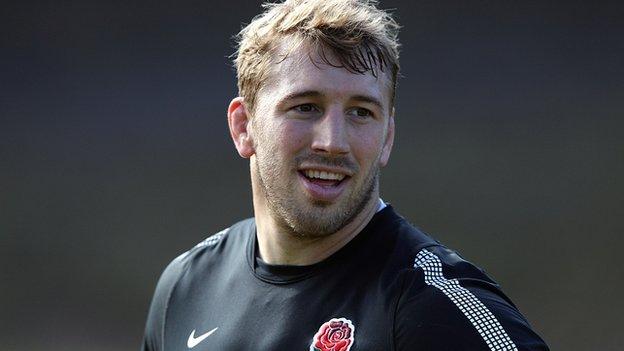 England captain Chris Robshaw hopes to treat the Twickenham faithful to a "much improved" attacking game against Wales on Saturday.

England won their first two Six Nations matches but without setting the tournament alight with their play.

"We know our performances weren't perfect but we've really worked on that," said flanker Robshaw.

"We always knew going up to Scotland and away to Rome that it was all about getting the win, first and foremost."

England have narrowly beaten Scotland and Italy so far under the stewardship of interim coach Stuart Lancaster but only managed two tries in the process - both charge-down scores by fly-half Charlie Hodgson, who misses the Wales game through injury.

Most of England's points have come from the boot of Owen Farrell, who starts his first international game at fly-half against the Welsh.

He said: "He's super keen to get back to playing. He's had a bit of a stop-start season as far as injuries are concerned, and for any young lad I think that's very frustrating.

"He's had two games [for Leicester] to get his match fitness back [and] he needed those two games to get his confidence back.

"In Test match football you need to be fit and confident that you can perform in the arena, and Manu is certainly ready for that step now."