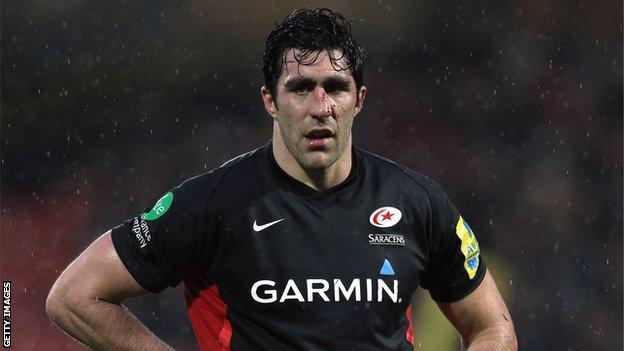 He has represented his country 25 times and his club on 84 occasions since debuting in 2008.

Brown is currently with the Scotland Six Nations squad, but has yet to feature in this year's tournament.

The 29-year-old former Glasgow Warriors flanker has 49 international caps and 38 Saracens games to his name.

Fellow back-row forward Wray, 22, has moved on to 25 club appearances by featuring 16 times this term.

Former England Under-20s Winger Short, 22, has registered 15 points from his 21 games this season and has 97 in total across 49 appearances.

"James has made fantastic progress over the past couple of seasons to a point where he is widely admired across the Premiership," said Sarries director of rugby Mark McCall.

"Kelly [Brown] is an outstanding international rugby player, who has been brilliant for Saracens. We are delighted he has committed his future to the club."

Locks Kruis, 22, and 23-year-old Irishman Sheriff have had differing impacts on the first team this season.

Kruis has added 19 appearances to take his tally to 28, while Sheriff has featured just the once since arriving from Leinster in October.

The signings conclude three days of contract announcements at the north London club, in which 18 players have committed their futures to the Premiership champions.