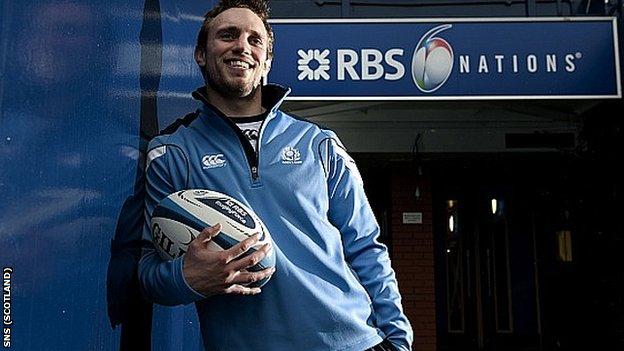 Mike Blair believes Scotland can surprise France at Murrayfield if they cut out the mistakes that have blighted their Six Nations campaign so far.

"If we can continue to get the quick ball we've had in the last two games we'll certainly give ourselves opportunities," said the scrum-half.

"There have been so many positives in those games, which almost makes things even more frustrating.

"The problem is that the negatives we've had have had a big effect on us."

Scotland failed to make territory count in an opening loss to England and were punished for a wretched 15 minute spell at the start of the second half in Wales.

"Our negatives have resulted in them scoring a try or kicking goals and our positives haven't," added Blair, who is set to win his 78th cap after replacing Chris Cusiter in the starting XV.

"That's a big thing for us - being able to turn that pressure into points."

As Scotland seek just a second victory over France since the Five Nations became Six in 2000, head coach Andy Robinson's game plan is an expansive one, aimed at multiple phases of play designed to wear down the opposition.

Therefore, much will hinge on the performance of Scotland's forwards and their ability to go toe-to-toe with a formidable French pack.

We have been improving, but we now need to get over the finish line

Blair added: "The forwards have done really well in the last two games, but the French, a lot of their strength is in their set-piece.

"They've got a huge front five, a couple of extra line-out specialists in their back row.

"Parity is something we're certainly looking for there."

John Barclay, normally an openside flanker, has been named at blindside this weekend and will be assigned to secure quick ball for Scotland.

"It all adds to improving the speed of the game," Blair explained.

"We lose a little bit of bulk there, but we make up for it in speed around the pitch.

"John's a very clever rugby player. He's not just a forward - he knows what he's doing and is constantly thinking about how he can get into the game.

"It's a massive game for him."

Blair hopes he can benefit from playing alongside Edinburgh team-mates Greig Laidlaw and David Denton.

"It's a big opportunity for me, playing the French at home, playing with Greig outside me," the 30-year-old added.

"I'm used to what he does and hopefully he is with what I do.

"It does make things a wee bit easier. With Dave Denton at eight as well there's that eight, nine 10 axis there.

"France are the World Cup finalists, they are the second best team in the world.

"It's a massive challenge for us. We have been improving, but we now need to get over the finish line."