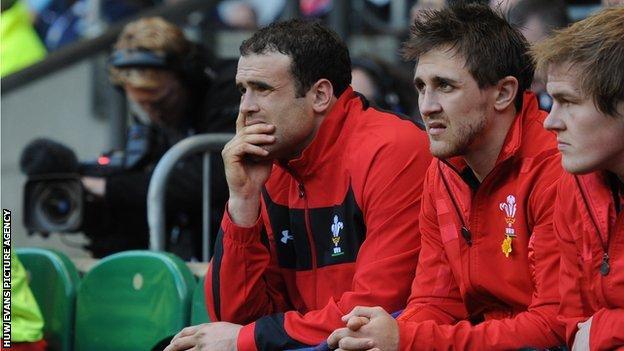 Centre Jamie Roberts is "touch and go" to be fit for Wales' home Six Nations clash with Italy on 10 March as they step up their Grand Slam bid.

Roberts limped off with a knee injury at half-time in Saturday's Triple Crown triumph against England, but hooker Matthew Rees is back in full training.

Rees has been suffering with a calf injury, while fellow hooker Huw Bennett is still in 'rehab' with calf trouble.

"He'll be touch and go for the Italy game but is rehabilitating really well so, fingers crossed, he'll make that game."

The Italians visit the Millennium Stadium on Saturday week hoping to earn their first Six Nations win in Cardiff, but Wales are now seriously scenting a third Grand Slam in eight seasons.

Warren Gatland's side then host France in Cardiff the following Saturday, on 17 March, in what could be a potential Grand Slam decider.

But Gatland's team are boosted by the likely return of former captain Rees the week before, for the Italy game.

"Hopefully he will be back and available for selection," added Jenkins.

James Hook missed Saturday's victory at Twickenham because of a bout of chickenpox, but the versatile back hopes to prove his fitness by playing for his club side Perpignan in their Top 14 game at Agen this Saturday.

If Cardiff Blues and Lions star Roberts misses the Italy game, Scott Williams, who scored the decisive try against England, is set to replace him and line up alongside Scarlets team-mate Jonathan Davies in the Wales midfield.

Wales lock Luke Charteris is returning to fitness after surgery on a broken wrist and has been named in the Dragons squad to face Munster in the Pro12 on Saturday but Charteris feels the Italy game is "too soon" for the 28-year-old.