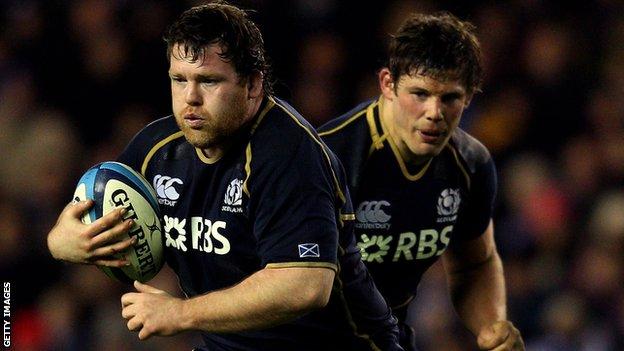 Scotland head coach Andy Robinson knows a good performance by his forwards will be vital for success against France in the Six Nations on Sunday.

Scotland have lost their opening two games, and also found it tough against the French pack in Paris last year.

"Sometimes it can be quite daunting because of their physicality and skill," said Robinson.

"The guys know if they get on the front foot, they can get some real success in this game."

Despite decent performances against England and Wales in this year's Championship, the Scots finished as the losing team on each occasion.

Because of their match against Ireland being postponed, France have only played once, beating Italy 30-12 on the opening weekend.

There's a great attitude and a desire to be successful. There is frustration, there is disappointment of what has occurred so far

Robinson is keen to improve his own record of just two wins from 12 in charge of Scotland in Six Nations competition, but he knows the size of the task against a French team which he admires greatly.

"The French play with a rhythm, they are a quality side, with quality players. That is why this is such a great Test match to be involved in," said Robinson.

"The tempo of the game is going to be important. If you've got the ball in play, you're keeping possession and you're asking questions of the opposition defence, that's when you'll put pressure on the opposition and you'll be able to score.

"Hopefully it's with us with the ball in-hand and not the French.

"As a neutral, I love seeing the French when they play with that rhythm because it's fantastic rugby."

The record books suggest a win for the World Cup finalists at Murrayfield, as Scotland have only triumphed once in 13 Six Nations meetings against France.

Defeat would be another blow to Robinson and his squad as they hope to avoid the wooden spoon.

But the Englishman is positive about the mood within his squad.

"There's a really good team spirit, one of the best I've seen amongst a group of players that I've coached," he added.

"There's a great attitude and a desire to be successful. There is frustration, there is disappointment of what has occurred so far.

"Those first two games have gone so you've got to use everything this next weekend to go out again, put your body on the line and deliver.

"They are ready to go for it. It's about putting in a complete 80-minute performance."