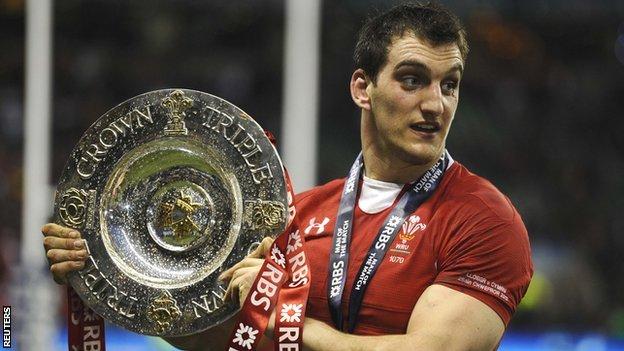 Man-of-the-match Sam Warburton spoke of his pride after lifting his first trophy as Wales captain.

The open-side flanker led Wales to a 19-12 Six Nations win over England at Twickenham on Saturday that secured the Triple Crown.

"Walking up those steps and... lifting the trophy was awesome, a brilliant feeling," said the 23-year-old.

"We wanted something to reward us for the hard effort, hard work we've put in over the last six months."

Warburton took over as captain from the injured Matthew Rees for the 2011 World Cup, where Wales impressed but eventually had to settle for fourth.

"For us it still goes all the way back to May when we had that Baa-Baas [Barbarians] game in June, the ridiculous pre-season we had in the summer," Warburton said.

"It's nice to get a bit of recognition that all that hard work has paid off."

Wales had only won twice in 24 years at Twickenham before Saturday's success but, after impressive wins over Ireland and Scotland, started the game as favourites against an inexperienced England side.

But England led 9-6 at half-time in a hugely physical, exciting encounter that was only settled five minutes from the end when replacement Wales centre Scott Williams stripped the ball from lock Courtney Lawes to score the winning try.

Wales still had to survive a nervous moment when Dave Strettle was denied a try in injury time, after television match official Iain Ramage could not clearly see whether the England wing had grounded the ball over the line.

Even if the try had been allowed, it would have taken a difficult conversion from wide on the right to tie the game and deny Wales their 20th Triple Crown.

"We ignored everything that was said in the media about us being favourites and all that rubbish, we didn't listen to it at all," Warburton added.

"We knew this was going to be the toughest test we'd had so far, you never come to Twickenham and have an easy game, as history tells you.

"It was one hell of a game, really tough. There were times when the boys had to pick me up off the floor and vice versa.

"England really threw everything at us, especially at the end, and they're an absolute nightmare to play when that situation happens and they very nearly went over.

"We're absolutely delighted with the win and all the boys are having a good time in the changing rooms now."

With the Triple Crown secure, Wales have home games against Italy on 10 March and France the following Saturday as they attempt to claim an 11th Grand Slam, following on from their last Championship clean sweep in 2008.

"We've got Italy now in two weeks at home and that's a must-win game for us, but we can't look any further than one game ahead," Warburton warned.

"We'll enjoy this match now over the next week or so and then knuckle down for the forthcoming matches."