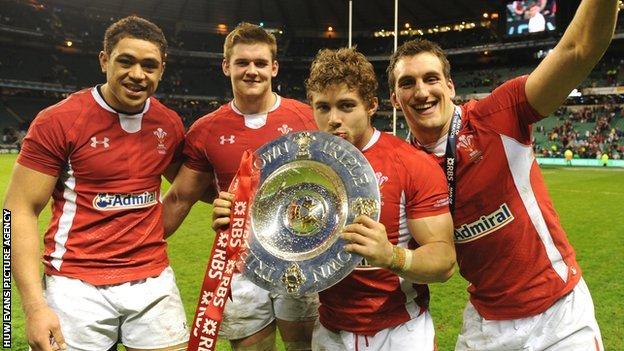 The full-back was one of the stand-out performers in Wales' 19-12 Six Nations win over England at Twickenham on Saturday that secured the Triple Crown.

"Our aim coming into this was to win every game and to win the Grand Slam and at the moment we're on target for that," said the Cardiff Blues player.

"But from the World Cup it's only made us stronger as a unit."

Wales impressed at the 2011 World Cup in New Zealand but eventually had to settle for fourth, after losing to France in a tight semi-final and then to Australia in the bronze medal play-off.

"We were incredibly disappointed after that semi to just miss out and all the boys got together and we've stayed strong," Halfpenny said.

"It's really bonded us even more and that's the character of a team, is when they're put down they react to that and get up and put things right."

With the Triple Crown secure, Wales now have home games against Italy on 10 March and France the following Saturday as they attempt to claim an 11th Grand Slam, following on from their last Championship clean sweep in 2008.

"Obviously home advantage is huge; going back home now to play Italy is our next focus and we've got to concentrate on... and hopefully come out with a win," Halfpenny said.

"We're going to enjoy this special moment because it may not happen again and we've got to make the most of it, really enjoy it and take it in."

Halfpenny was involved in the tackle that just denied England wing Dave Strettle that, with a tricky conversion to follow, could have tied the score.

The full-back hurled himself under the feet of the the Saracens flyer, hurting himself in the process, with centre Jon Davies and wing George North completing the tackle that - after a long look from television match official Iain Ramage - denied Strettle the score.

"I took a bump to the head and was pretty dazed, had to see the physio... I think I caught my head between his knees," Halfpenny said.

"I just tried to do anything to bring him down, the physio then said it was no try and we'd won."