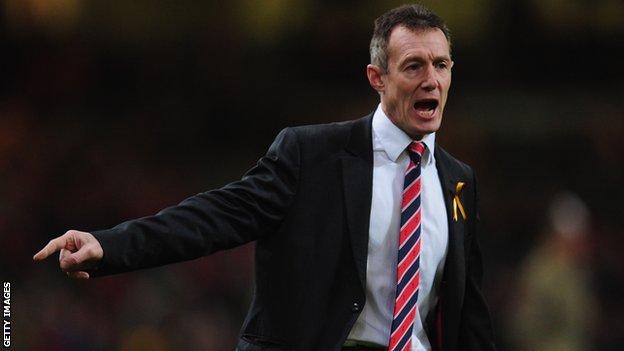 Assistant coach Robert Howley has predicted Wales' Grand Slam-chasers will become "a very special side in the not-too-distant future".

The former Wales and British and Irish Lions scrum-half praised his side for the gutsy manner of their 19-12 win over England at Twickenham.

The win has seen Wales move up a place to fifth in the IRB rankings above England.

Howley highlighted scrum-half Mike Phillips' efforts while Rhys Priestland was in the sin-bin in the second half.

Howley said: "That yellow card and how we dealt with the yellow card - that's about learning and these players have learnt over that period of time.

"We shortened up our game, went to a pick-and-go game and probably kept the ball, which was significant really in the end, for a period of six-to-seven minutes of the 10 minutes.

"Losing a 10 is pretty significant in terms of giving shape to your game.

"I think Mike Phillips can take great credit in terms of the organisation and probably how we dealt with that period of time because... when you go down to a yellow card away from home statistics show, particularly our statistics, that it's seven-to-eight points when we get a yellow card.

"So to come out of that period of time 3-3 all, I think was hugely significant in the result.

"The second-half performance in Twickenham, backs against the wall, not playing well - to guts it out as we did, I think people have mentioned about being a special side.

"I think that this side can be a very special side in the not-too-distant future.

"But the maturity of the players showed, particularly in the second-half - and I think that's been a great asset of ours in the last couple of games we've played.

"Of course you're going to lose your composure in games, but it's getting back and putting us into winning situations and I thought it was a tough Test match.

Wales face Italy in Cardiff on 10 March and France's trip to the the Millennium Stadium a week later ends the tournament for those two nations.

There is an injury doubt over centre Jamie Roberts for those two games, but Howley says with or without the powerful Cardiff Blue, Wales must seek to improve.

Howley added: "There's elements of our game which we can improve on, which we'll need to in the next two games.

"I've been to Twickenham many times and it has not been a happy hunting ground for many Welsh sides.

"And to win the way we did - I think that we'll probably play better and lose games.

"But we'll take the win and we gutsed it out and showed a huge amount of character."

Former captain Michael Owen, who lifted the Six Nations Trophy when Wales sealed the 2005 Grand Slam, also insists this current Welsh team are on the brink of becoming "a very, very, formidable side".

"Looking at the performances in the World Cup coming into this Six Nations I think it is the best Welsh team I've seen in my lifetime," believed Owen.

"I think they are on the road to becoming a very, very formidable side.

"It's hugely exciting and I can't see anyone stopping them getting the Grand Slam. They are a really, really tremendous team so it's exciting to be a Welsh fan."