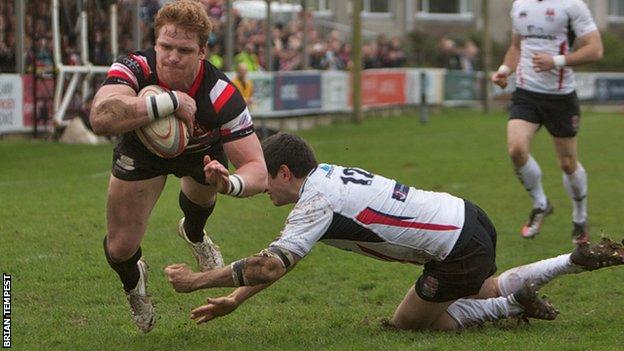 Cornish Pirates backs coach Harvey Biljon says his side were lucky to come away with a bonus point after beating Moseley 32-17 in the Championship.

Darren Daniel's first try for the club and a Tom Cooper score helped the Pirates to an 18-7 lead at half time.

It took tries from Matt Evans and Ceiron Thomas in the last 10 minutes to seal the bonus after Oliver Thomas's try brought Moseley to within a point.

"We were lucky to get four tries and a bonus point," Biljon said.

"Moseley definitely came to play and they made it very difficult and very tough for us.

"Every time we got the ball in the right position in the field to create an opportunity we turned the ball over cheaply.

"Our unforced errors and the way we turned the ball over wasn't of Pirates standard and it's an area we'll have to go away and look at," he added to BBC Radio Cornwall.

But Biljon added that his side must look at the positives as they finished stage one of the Championship in third place, earning them a place in a play-off pool with Bedford, Leeds and Rotherham.

"We've come away with a bonus point victory and we're a little bit disappointed because we want to do better.

"But we've got to look at the positives - we are doing well, we've kept the momentum, seven wins from seven, let's make sure we prepare the best we can for the play-offs."