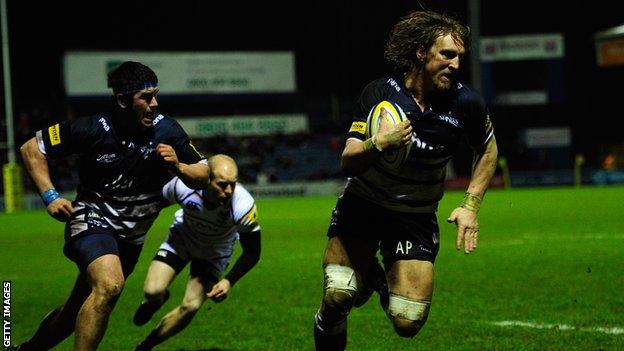 The 30-year-old number eight recovered from a slip that gifted his former club their opening try, to score the fourth of Sale's six touchdowns.

"I thought he started the game really well, then he had a couple of hiccups, he probably started to overplay it."

Hanks added: "In the second-half you just saw how far he's come and matured as a player.

"I thought some of his involvements were big, you can see why he was a British Lion."

Wales international Powell joined Sale in the summer after being released by Wasps and has scored two tries in his 13 appearances.

The Sharks remain in seventh after the weekend's fixtures, but have closed the gap on the teams above them with the bonus-point win.

It was Sale's first five points of the season and the highest total they have managed in a Premiership game so far, something which delighted Hanks, who is in charge of their attack, game plan and defence.

"We've said all year we're going to play and we did that," Hanks stated.

"Sometimes when your play is open and positive we often give chances to the other team.

"But I think it's more important we celebrate the 46 points that we did score, I thought some of the rugby we played was outstanding.

"Everyone involved in the game from the referees, to Wasps, to the people that played, appreciate the way we went about our work.

"We've been training well the past two or three weeks and we've been building towards this and it was nice we were able to transfer the tempo we've trained with into a game.

"I think it was the most complete [performance]. I thought some of the off loading and some of our collision work allowed us to play.

"We took control of our own game and that's what was pleasing."