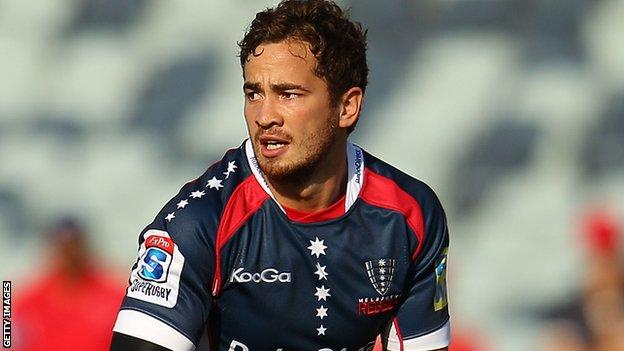 The 24-year-old came through the academy at London Wasps but moved to newly-formed Super 15 side Melbourne Rebels in 2011 on a two-year deal.

In a season marred by disciplinary problems he was the Rebels' leading scorer last year with 108 points.

Sale are thought to be in advanced talks with the fly-half with an announcement expected within two weeks.

"I know Steve Diamond has done a fantastic job over the last 18 months, on and off the field, the changes are unbelievable.

"We have got a great bunch of guys and we are in a position now where we are only looking to recruit two or three players for next season.

"For the last few years we have been scrapping around near the bottom of the league, and 15 or 20 players have been coming and going, and you just can't get any continuity.

"I know we've signed a couple of players for next season, a couple of forwards - and one of them is [Scotland lock] Richie Gray, who's going to be a fantastic signing for us.

"But I know he [Diamond] is looking at signing a couple more players and Cips is obviously one of them."

Cipriani made his professional Wasps debut aged just 17 and became a key figure in their Premiership-winning side in 2007-08 before helping them to secure the Heineken Cup campaign the previous season.

He has won seven England caps but has not played international rugby for two and a half years, having been out of favour for most of Martin Johnson's time in charge.

Sale first-team coach Tony Hanks, who worked with Cipriani during his time at Wasps, told BBC Radio Manchester: "He's a quality player. I've known Dan since he was at school, he was there in my first stint at Wasps and he was obviously a good player from when he was young.

"I think Super Rugby has been good for him and I'm looking forward to seeing how he's going to go in the second year.

"He's still young and fly-halfs in my mind don't mature until their late 20s. I think that's why someone like Dan Carter has been such an exception, because it does take time to learn the game.

"Regardless of where he goes it will be great to see him back plying his trade back up in the UK."