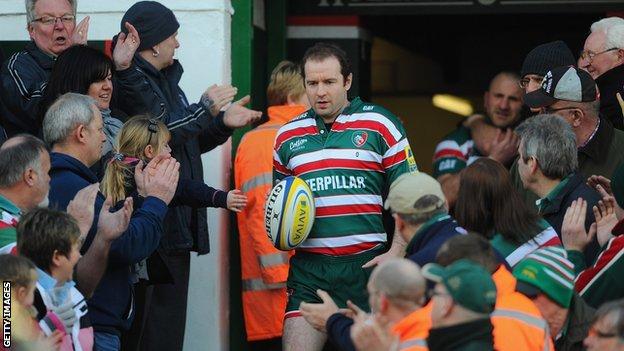 Leicester captain Geordan Murphy said playing his 300th game for the club was a fantastic feeling and he was honoured his achievement was recognised.

The 33-year-old full-back was allowed to take to the field on his own by his team-mates for Saturday's emphatic 42-15 victory over Newcastle Falcons.

The Ireland international also had a presentation at the end of the game.

"It was fantastic. It's a tremendous honour. I'm glad so many fans stayed to give me a clap and cheer," Murphy said.

"I was a bit nervous before because there was a lot of pressure on me to perform. Newcastle were a massive stumbling block and it wouldn't have been much fun going to receive a presentation on the back of a loss.

"We had to focus on the game and thankfully the guys played pretty well. I was able to relax and enjoy the last 15 minutes."