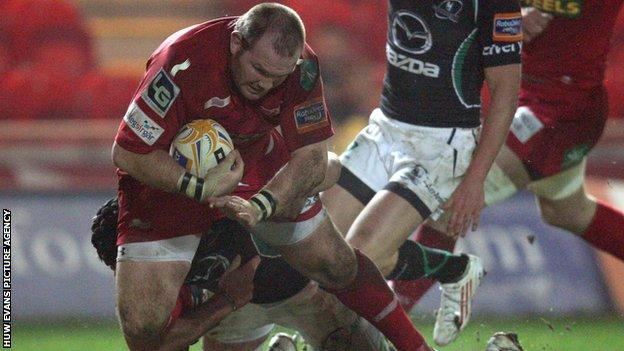 Andy Fenby and Rhodri Jones crossed for first half tries as the home side led 14-3 at the interval.

Ethienne Reynecke crossed for a consolation score for Connacht side before Phil John scored the Scarlets' fifth with the last move.

Connacht started at a high tempo and nearly shocked the home side when wing Tiernan O'Halloran was just denied by a frantic Scarlets scramble defence at the corner flag.

But the Scarlets were also close in their first attack after 14 minutes when a forward drive was judged to be held up over the line by referee Marius Mitrea.

They weren't to be denied for long though and after turning down a simple kick at goal, scrum-half Liam Davies took a tapped penalty from the next free-kick

Miah Nikora landed a straightforward penalty to get the visitors on the board after 23 minutes.

After a scrappy spell of mistakes by both sides, the Scarlets at last put together a string of phases and Wales squad prop Rhodri Jones powered over from close range.

Stephen Jones added the simple extras with the home side deservedly leading 14-3 at the break.

After spurning first half shots at goal the Scarlets changed tactics after the break when Stephen Jones knocked over a simple penalty after a retreating Connacht scrum was penalised.

Visitors' captain Gavin Duffy was left infuriated by a string of penalties from referee Mitrea and flanker John Muldoon bore the brunt of the official's displeasure when he was yellow-carded just two minutes after coming on.

The Scarlets bagged their third try 16 minutes into the second half when hooker Emyr Phillips powered over underneath the posts from a slip pass by Stephen Jones,

It took just a further six minutes to seal the bonus point when number eight Kieran Murphy stormed through a disorganised defence from 15 metres out, Jones converting both scores.

Johnathan Edwards limped off with a leg injury to put a slight dent in the Scarlets' evening before Connacht earned a deserved consolation try through replacement hooker Ethienne Reynecke converted by Miah Nikora.

But the Scarlets had the final word in injury time when Dan Newton put replacement prop Phil John over, Jones converting with the final kick of the game.