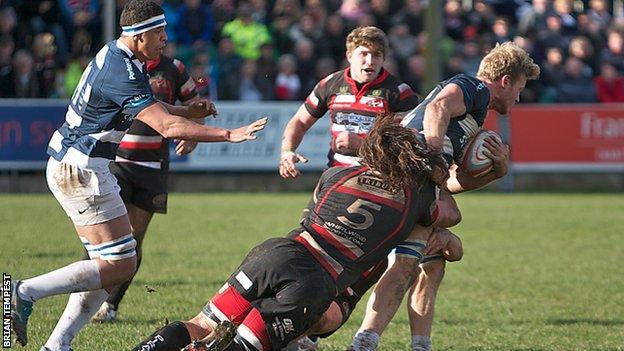 The Rugby Football Union has finalised the play-off groups for English rugby's second tier, the Championship.

The top eight teams from the first stage of the season will play in two groups of four, with the top two sides each making the semi-finals.

Pool A will see the league winners Bristol up against London Welsh, Nottingham and Doncaster.

Second-placed Bedford are in Pool B alongside the Cornish Pirates, Leeds Carnegie and Rotherham.

The bottom four sides in the 12-team league will fight it out to avoid relegation to National One.

London Scottish, Moseley, Plymouth Albion and Esher will all hope to steer clear of the drop into the third tier of English rugby.

The promotion play-offs see each side in the pool play each other home and away, with the highest-ranked side given a three point start, the second-best two points and the third-highest ranked side one point.

Four points are on offer for a win, with a bonus point on offer if a side scores four or more tries or if a side loses by seven points or less.

The top two sides from each pool will go through to a two-legged semi-final, with the winners meeting in a two-legged final.

The team that wins the final will win the Championship, and if they meet certain criteria, such as having a stadium which holds at least 10,000 people, will then be promoted to English rugby's top flight, with the bottom side from the Premiership replacing them.

Last season Worcester returned to the top flight after a season in the Championship as they beat Cornish Pirates 46-32 on aggregate.

It is the third season that promotion to the Premiership has been decided by a play-off system.

In 2010 Exeter Chiefs made it to the Premiership for the first time in their history as they beat Bristol, who had been relegated from the top flight in 2009.

The Championship and its play-off system was brought in after the 2008-09 season to try to make the second tier of English rugby more exciting.

Previously the team which had been relegated from the Premiership in the previous season, and had a parachute payment from the television rights payments they earned from their time in the top flight, tended to win the second tier with ease.

It led to many matches being rendered meaningless come the second half of the season as only one side would be relegated.

For the relegation play-off each side is given one point for every match they have won during the first stage of the season, meaning Scottish, Moseley and Albion all start with six points while Esher have three.