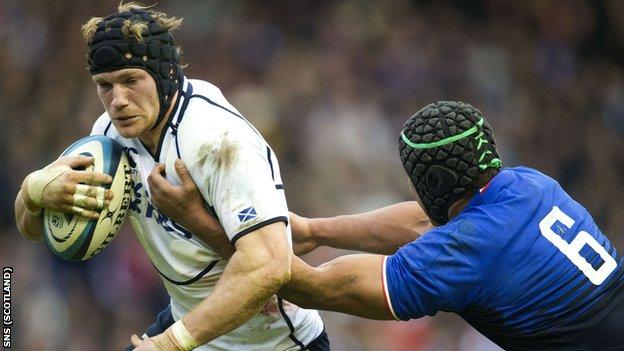 Scotland's players are fed up losing and are determined to end the Six Nations campaign on a high.

Following losses to England and Wales, Scotland were beaten 23-17 by World Cup finalists France on Sunday.

"We are improving week to week and the games are showing that. We've got two games left and everyone's targeting Dublin to put that record right."

Sunday's result at Murrayfield meant a fifth straight Test defeat for the first time since 2004 and leaves head coach Andy Robinson with a record of just two wins from 13 Six Nations outings.

Defeat to Ireland on 10 March would likely set up a Wooden Spoon decider with Italy on the final day of the tournament.

Edinburgh winger Lee Jones, who scored his first try against Les Bleus on his third Test appearance, added: "We've shown we can compete against the side which contested the World Cup final so we're in a good place going to Dublin.

"If we can score tries against France, Ireland have a similar defensive system. We can take confidence from that and hopefully score tries and make the breaks against Ireland.

"We just need to take what we can and get a win against Ireland."

Ireland lost at home to Wales on the opening weekend but Jones was impressed by their ruthlessness in attack in the 42-10 win over Italy on Saturday.

There will be changes for the trip to Dublin after winger Rory Lamont required surgery to stabilise a fractured fibula.

Scotland are already without back-row duo Kelly Brown (leg) and Alasdair Strokosch (hand), but Max Evans (ankle) and Joe Ansbro (back) could return to contention for the trip to Dublin.