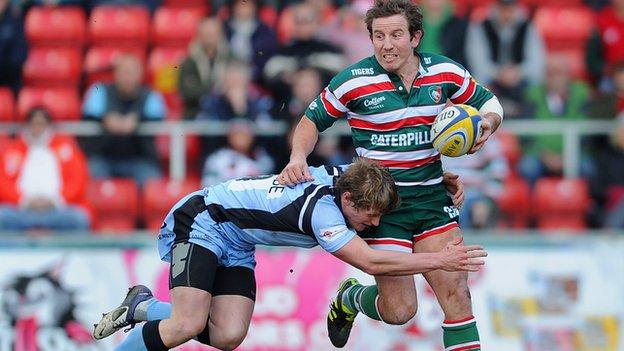 Bristol have secured the signature of veteran Leicester Tigers scrum-half James Grindal on a two-year deal.

Grindal, 31, has turned out for Newcastle Falcons as well as the Tigers in a top-level career that has spanned 13 years.

"I met [coach] Liam Middleton in January and spoke about the possibility of coming to Bristol," Grindal told BBC Radio Bristol.

"I was really impressed with him. He's a very young, ambitious coach."

Grindal is confident that he is joining a team that is on the up.

"I'm delighted to accept the deal, It's going to be a fantastic challenge," he added.

"Bristol's ambitions are clear to all, they are club with a great history, they are a club that deserves to be in the Premiership and it's only a matter of time. We hope it will be this year.

"If the team is in the Championship, I'll come down and push them on to get them promoted next year."

Having won three Premiership titles, two Heineken Cups and the Powergen Cup, Grindal has a wealth of top-level experience, but admits he knows little of the Championship.

"I'm not overly familiar, I've got a lot of friends that play for various teams. A couple of good friends who play for Bristol and I have spoken to them about the move.

"It's a tough league and Bristol have done really well this year, consistency is important but I think it's come down to a cup final every game now with the play-offs and fingers crossed it goes well."

Middleton was pleased to welcome Grindal, who he sees as the ideal player to strengthen his team.

"James brings with him extensive experience at Premiership level and a real energy to contribute to what we are doing at Bristol," he said.

"He is a perfect fit, both as a player and person and I'm certain he will make a positive impact on our game and our culture."