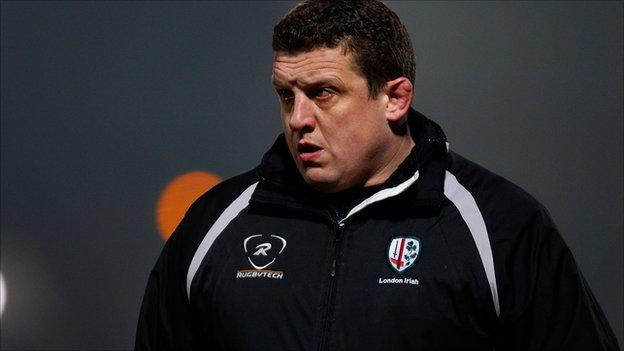 London Irish head coach Toby Booth says he is confident his side can return to form after their recent slump in form.

Booth's side were beaten by Northampton at the weekend and have lost their last three Premiership games, including a defeat at bottom side Newcastle.

It has left the Exiles eighth in the Premiership, all but ending their hopes of a play-off place this season.

"We need to focus on what happens on the pitch and what we can control," Booth told BBC Radio Berkshire.

Booth admitted that recent performances have not been good enough but urged his side to work hard to try to qualify for next season's Heineken Cup with a strong finish to the season.

"There was a lot of comment about the performance against Newcastle and it wasn't acceptable," added Booth.

"We will get back to work and see how we can improve and that is the standard we set."

He added: "We have to make sure we improve in every session and make sure we leave no stone unturned to try to give us every chance of winning.

"Then it is up to the team to perform on the day and I am pretty confident we will be back to winning ways soon."