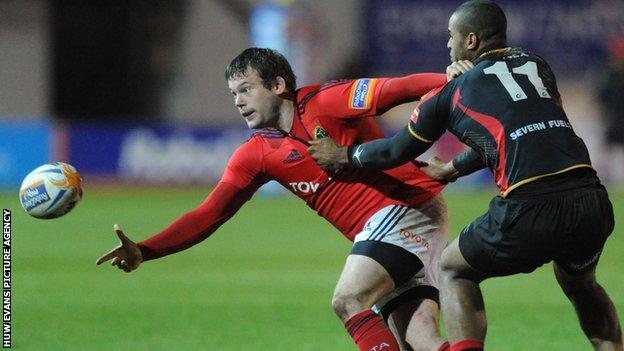 Munster climbed to second in the Pro12 table after securing a hard-earned win over the Dragons at Rodney Parade.

The home side had led 11-9 at the interval thanks to a try by captain Ashley Smith which was created by Will Harries.

But the visitors scored 15 points in the last 12 minutes to secure the win that sees them leapfrog the Ospreys.

Luke O'Dea and Felix Jones crossed for tries to inflict the Dragons' second home league defeat of the season.

Luke Charteris returned to the Dragons line-up after surgery on an injured wrist and successfully came through the 80 minutes.

Munster were without a sizeable international contingent but settled quickly and opened the scoring with a third-minute penalty from fly-half Ian Keatley.

The Dragons worked their way into the game and deservedly levelled the scoring thanks to a penalty from opposite number Lewis Robling on 17 minutes.

And the hosts were soon in front when a marvellous 50-metre jinking run by full-back Will Harries allowed centre Ashley Smith to dive over to make it 8-3.

However, the conversion was wide and it was the Irish visitors that soon got their noses back in front thanks to a pair of Keatley penalties.

Back came the Dragons and Robling knocked over another penalty to edge the hosts in front in an error-strewn encounter, an 11-9 lead that they held at the break.

The hosts were having the better of things in possession and territory but were unable to break clear of a resilient Munster side.

The Dragons suffered a blow when centre Andy Tuilagi limped off the field and was replaced by 17-year-old Jack Dixon, making his Pro12 debut.

And the teenager nearly had a dream introduction to the Pro12 when he featured prominently in a dashing 60-metre move that was ended agonisingly close to the line.

Munster came under severe pressure when scrum-half Tomas O'Leary was sin-binned on 58 minutes after referee Carlo Damasco got fed up with the visitors infringing at the breakdown.

The Dragons kicked a penalty to the corner and laid siege to the Irish province's line.

Munster defended heroically and next time the Dragons earned a penalty they went for the posts with Robling successfully making it 14-9 with 15 minutes remaining but Munster hit back.

Replacement Denis Hurley went flying through a gaping hole in midfield and the ball was worked wide from the next phase for fellow wing Luke O'Dea to dash over down the right.

Fly-half Scott Deasy, a second half replacement, missed the conversion but was accurate minutes later when presented with a 40-metre penalty to put the visitors 17-14 up.

And it was game over with five minutes left when full-back Felix Jones snaffled a loose ball in midfield to race over under the posts, Deasy adding the routine extras for a hard-earned win and deny the Dragons a losing bonus point.