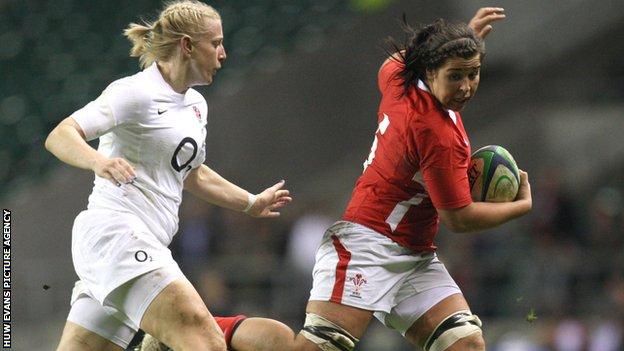 The result against England at Twickenham was as expected but I wouldn't say the 33-0 defeat was as heavy as it could have been.

Despite the loss, Wales can take a lot of positives out of the game. They defended heroically and they did break the England defensive line on a few occasions.

To think England scored nine tries against Scotland and a further seven tries against Italy, conceding just five tries wasn't too bad in the grand scheme of things.

Wales held them to 13-0 at half-time but then England brought their big guns off the bench at half-time and that made a big difference.

There was a really good crowd for the game. I spoke with some of the girls afterwards and, despite the result they, thoroughly enjoyed playing at Twickenham in front of such a big crowd.

Hopefully it's the start of more games for the women on these big stages.

However they didn't get to see Wales' Triple Crown win over England, which preceded their game, as they were warming up and getting ready to play.

Next up for Wales is the re-arranged game in Ireland on Saturday and the girls are really up for this one.

If they can take the positives from the England match, then I think they can do very well over there.

Due to lack of funding in the women's game, Wales are flying out to Ireland early on Saturday morning, playing in the afternoon and flying back on Saturday night.

Getting up at five in the morning, travelling all day and then having to play an international game of rugby is not ideal at all and that's going to be the test.

Knowing that the Welsh girls are not going to be in the best physical condition after travelling in the morning, then Ireland are going to be favourites.

Ireland will also be very confident after beating Italy convincingly 40-10 last weekend and they only lost narrowly by one point in France.

They've got a bit of a fortress playing in Ashbourne, where they tend to win most of their home games.

It's a tough end for Wales' Six Nations campaign, with four games in four weeks without a break and they haven't got the strength in depth teams like England have.

But if they can play well out in Ireland and get a result, I can see them beating Italy convincingly at the Millennium Stadium and then who knows against France?