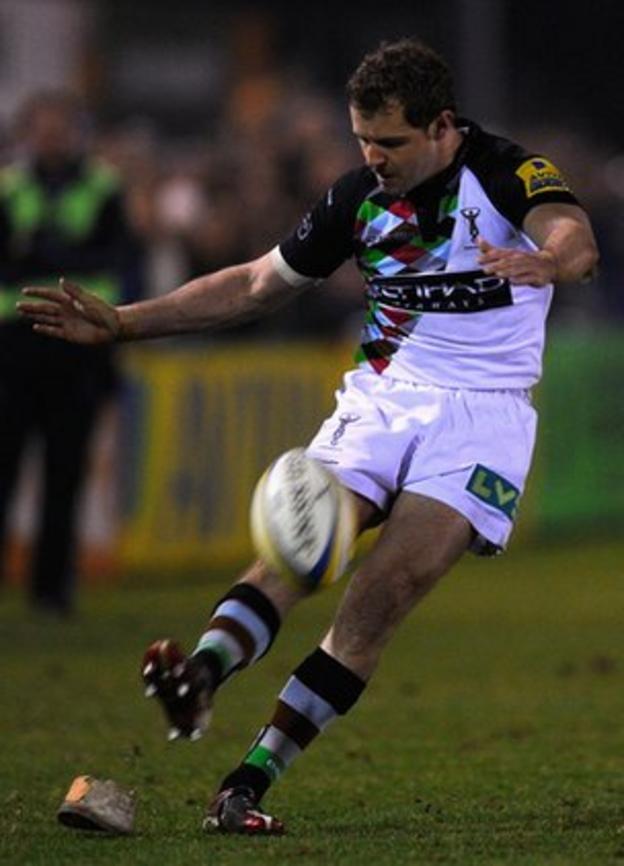 In a battle of the boot at Kingston Park, stand-off Jimmy Gopperth's three penalties appeared to have won it for the home side.

But Quins number 10 Evans kept his cool to land a third penalty of his own.

The Falcons twice had to overcome the handicap of being reduced to 14 men, having scrum-half Chris Pilgrim and hooker Rob Vickers sin-binned.

But, after an ill-tempered encounter, Quins director of rugby Conor O'Shea launched a scathing post-match attack at the Falcons' rough tactics.

An interminable first half lasted 58 minutes after Quins hooker Chris Brooker was treated on the pitch for a dislocated knee and then taken off on a stretcher.

There were several other stoppages and a sin-binning for Pilgrim after he pulled back Jordan Turner-Hall off the ball, and the half ended with a scuffle between Falcons flanker Taiasina Tu'ifua and Newcastle's Turner-Hall and centre partner George Lowe.

The line is drawn at punches in the face, boots in the face and short-arm tackles and yes, I think Newcastle overstepped that mark

Lowe reacted to a late hit from Tu'ifua and all three players were ordered down the tunnel by the match officials.

What little rugby that was played saw Evans kick a third-minute penalty, cancelled out by Gopperth in the 11th minute.

Both kickers also hit the post and Gopperth was narrowly wide with a shot from the halfway line.

Newcastle would have been happy enough with a 3-3 scoreline at the break and again when the scores were still tied at 6-6 with 20 minutes left after Evans and Gopperth had again exchanged penalties.

When referee Andrew Small gave a penalty to Newcastle in the 66th minute, Gopperth shaved the post from 40 metres.

Vickers was sin-binned for punching Marler with 10 minutes left - it could have been red - and it seemed a major blow for Newcastle.

But within seconds they were awarded a penalty. Gopperth kicked it for a 9-6 lead and Newcastle looked set for a memorable victory in front of their biggest crowd of the season.

However, after an offence in the scrum, Newcastle were penalised again and up stepped Evans to level with a last-gasp penalty.

"We have to front up. You cannot allow yourself to be bullied like we were at Leicester.

"Was it my instructions to go over the top? Certainly not. I never would tell my players to do that. I don't condone any sort of dirty play, but I do ask my players to front up.

"I'm not happy with the ill-discipline we showed at times. You cannot afford to play the game for 20 minutes with 14 men and there is no excuse for players losing their discipline and we will have to address that."

"We had to scrap. The atmosphere was febrile out there. All credit to the Falcons in what was a very physical game but, on more than one occasion, I think the line was crossed.

"It was tough and uncompromising and I just hope Newcastle stick to not going over the edge."